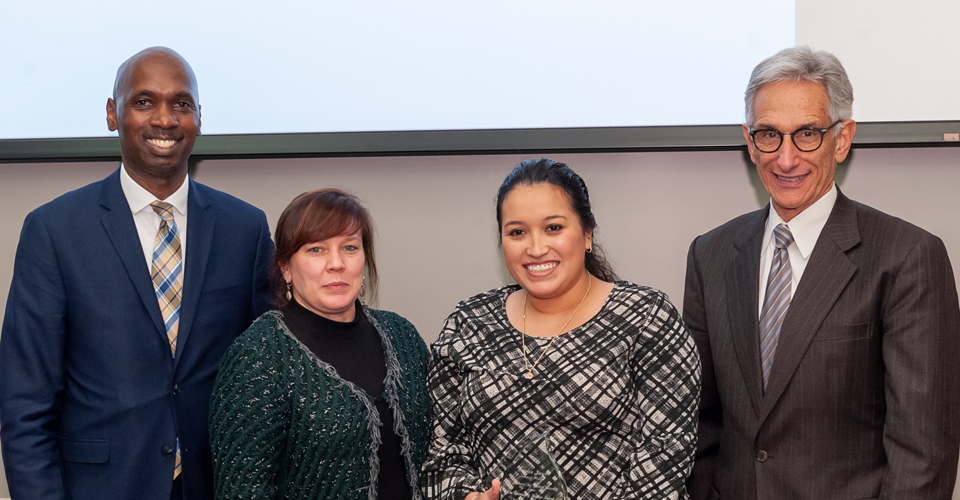 When Andre Burton, J.D., interim vice president for the Office of Human Resources & Diversity, Equity and Inclusion, stepped to the podium at the 2018 Value Community and Diversity Reception, he hinted that the audience would be in for a treat ― a chance to hear some really significant achievements by all of the student nominees.

The reading of the nominations for each of the 14 students was a first for this event. And Burton, who is not prone to hyperbole, didn’t disappoint. As he and chair of the diversity council, Julie Aultman, Ph.D., took turns reading about the students nominated for two annual awards ― the Community Builder Award and the Walgreens Pharmacy Diversity and Inclusion Excellence Award – attendees in the packed Cook Alumni Hall seemed to marvel at the magnitude of the service being provided across the globe by these already-busy medical students.

The Community Builder award recognizes a medicine, pharmacy or graduate student who has demonstrated a commitment to being open and sensitive to the unique needs and interests of diverse populations. After the eight nominees were recognized, it was announced that Carmen Javier, a second-year medicine student, and Katherine Joyce, a fourth-year medicine student, were both winners.

Javier, who is the chapter founder and inaugural president of NEOMED’s Latino Medical Student Association, began working to improve the lives of others before moving to Ohio. She served as a volunteer services coordinator at the Community Health Corps at the Venice (California) Family Clinic. She also held the UCLA Fellowship for International Service and Health in Mexico. Javier focused on cultural awareness as a Spanish language instructor for children ages 3-7 at a Great Lakes Science Center summer camp.

Prior to medical school, Katherine Joyce advocated for children who were impacted by poverty as she worked at the flagship site of a multi-site study at Boston Medical Center. She discussed issues related to childhood poverty with state legislators and developed a violence prevention and community outreach newsletter that is still published today. Joyce also worked on global health in Somalia with the Health Poverty Action Initiative and produced short essays and films about Somalia’s health and political situation.

Two of the eight nominees for the 2018 Walgreens Pharmacy Diversity and Inclusion Excellence Award, announced next, had also been nominated for the Community Builder Award.

The Walgreens Pharmacy Diversity & Inclusion Excellence Award recognizes a NEOMED College of Pharmacy student who promotes and supports the needs, values, and respect of underrepresented communities; who is sensitive to the issues of diversity; and who takes actions to promote the ideas of inclusion, equity and community. The 2018 winner was Rachel Neugebauer, a fourth-year pharmacy student.

Neugebauer’s work has included organizing community service activities at the Hartville Migrant Clinic while serving as vice president of the NEOMED Hispanic Community Outreach Group. Neugebauer has volunteered at a charity pharmacy in the Dominican Republic. In  January 2019, she will participate in a Holy Family Honduras Medical Mission as a medical interpreter and pharmacy intern.

Continuing her advocacy for Latino patients, Neugebauer has chosen areas with large Latino communities for her fourth-year rotations.

Where do they find the time?

The following excerpts from their nominations offer a sampling of the work and diverse backgrounds of the students honored at the November event.

All details regarding students’ community service were excerpted from their nominations.