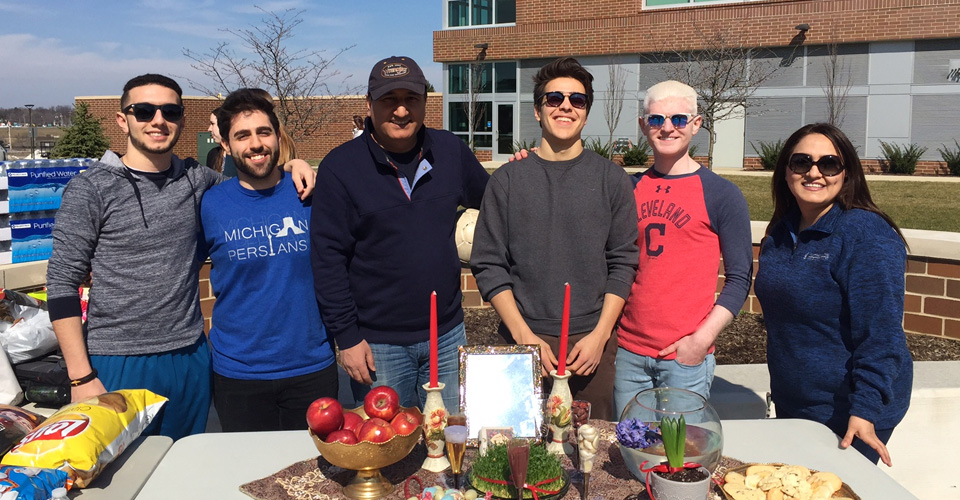 The Persian Student’s Association hosted its first Persian New Year celebration on March 21, gathering outside in the common area of The Village. Getting their name written in Farsi calligraphy (like the name NEOMED, written here) was just one thing students could do during the festivities. “We started the Persian Student’s Association this year in order raise awareness about the Iranian culture and history,” said Pouya Jouharian, vice president of the new club. Nowruz (pronounced NO-Rooz), the first day of spring, is one of the most important holidays in Iranian culture, says Jouharian. To mark it, club members set up a “Haft Seen” table, which traditionally includes seven items that start with “S” in Farsi: greenery (sabzi), sweet paste made from wheat grass (samanu), Persian olive (senjed), garlic (seer), apple (seeb), sumac and vinegar (serkeh).

Additional items commonly placed on the table include a goldfish bowl, a mirror, coins, candles, decorated eggs and a holy book. Each item symbolizes a concept such as rebirth, love, affluence or beauty. These celebrations last for 13 days until “Sizdebedar,” at which families and friends gather outside for games and a big picnic.

At the NEOMED party, club members played Persian music on their phones. For safety reasons, corn hole, bocce ball and other games were substituted for traditional bonfire jumping (done to signify escaping the illnesses or misfortunes of the past year). Hot dogs, pancakes, soft pretzels, chips and snow cones substituted for classic Persian dishes, which can be pricey to prepare, said Jouharian, who added, “We are glad and thankful so many people came out to join in our celebration and get a taste of our culture!”

The organization’s description on Presence notes, “Despite the name, membership is not restricted to students of Iranian decent, rather students of all races, cultures, religions, and ideas are more than welcome to join PSA.”