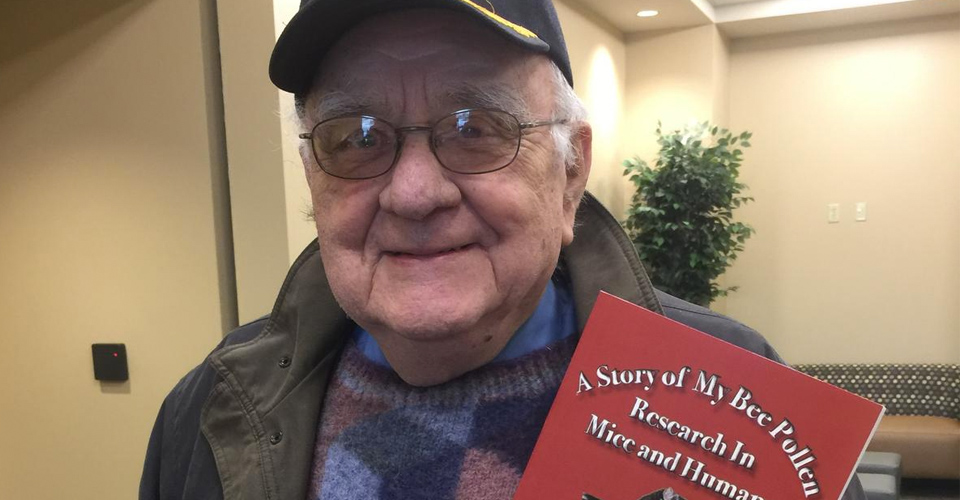 A Propolis a Day

When a former Irish Jesuit priest suggested bee pollen as a treatment for alcoholism, Robert A. Liebelt, M.D., Ph.D., was skeptical—until he began to do the research. With a handshake, the man known as “Mr. Bee Pollen” and the addiction expert sealed a deal that resulted in Dr. Liebelt feeding bee pollen to mice every day for a year to test this outrageous claim.

In addition to being known for his work in addiction medicine and for his two books on alcoholism, Dr. Liebelt is recognized as the charter dean of the Northeastern Ohio Colleges of Medicine (now NEOMED). In his latest book, A Story of My Bee Pollen: Research in Mice and Humans, Dr. Liebelt details his journey of using bee pollen for his personal health. Each day, he and his wife take two teaspoons of bee pollen and two tablets of propolis—the brown, sticky residue otherwise known as “bee glue,” which holds hives together.

Dr. Liebelt says his research has found that bee products have many useful benefits: enhancing energy; smoothing skin; preventing asthma; treating allergies; and boosting the immune system. He had always struggled with hay fever until he began taking propolis. Now, he says, he can enjoy the changing seasons instead of dreading the high pollen count.