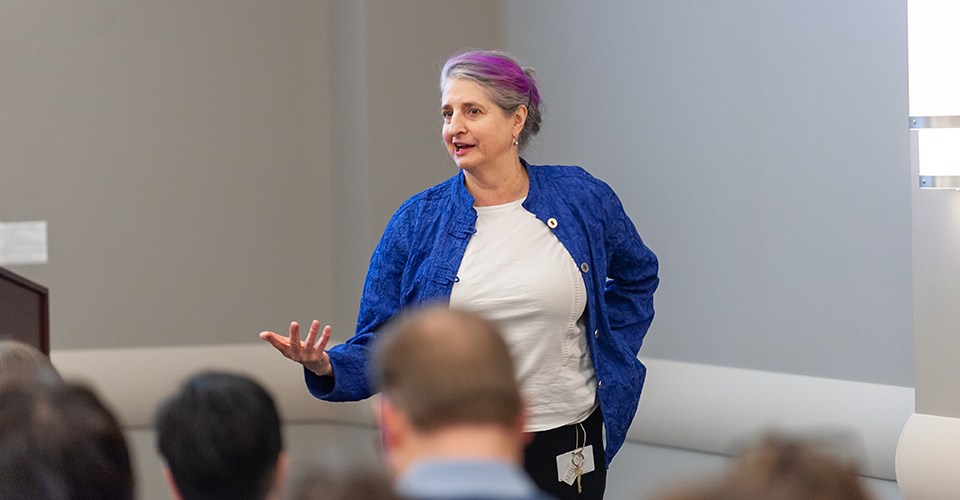 A Research Forum to Remember

Once upon a time, there was a young, messy-haired girl who dreamt of becoming a veterinarian and astronaut.

Two of her favorite things in life were eating and asking questions. It was those two things that eventually led her to study swallowing dysfunction (dysphagia) and the protection of respiratory airways in pre-term infants.

Rebecca German, Ph.D., a professor of anatomy and neurobiology, shared this backstory to her long and productive career in science at the Office of Research and Sponsored Programs’ second university-wide research forum, held Tuesday, Nov. 27 in the Grand Ballroom. The event began with a social hour, where scientists, staff and all from the University community could mingle over snacks before listening to German give a brief talk.

Putting the “team” in science

A hallmark of Dr. German’s work at NEOMED has been mentoring young scientists – especially women, who can face challenges in the STEM world. So, it was fitting that at this forum, Dr. German chose to spend part of her time highlighting her team’s research.

Dr. German shared that in her lab, everyone contributes in a major way. Her team holds such a special place in her heart that Dr. German even gave a shout out to Judi — a lamb rescued by one of her research assistants.

Her and her team’s research with the youngest population has potential applications for the elderly, who often develop swallowing problems along with neurological diseases such as Parkinson’s.

Recruited to NEOMED from Johns Hopkins University in 2013 and honored in 2018 with NEOMED’s Outstanding Faculty Research Award, Dr. German continues to add to her list of significant grant awards. At a recent grantsmanship workshop (the first in a series she has started for NEOMED colleagues; watch The Pulse for the next date), she also pointed proudly to the name of her mother, Pearl German, Ph.D., on a list of  National Institutes of Health recipients.

Stay tuned. Watch the Pulse for the date of the next quarterly research forum.