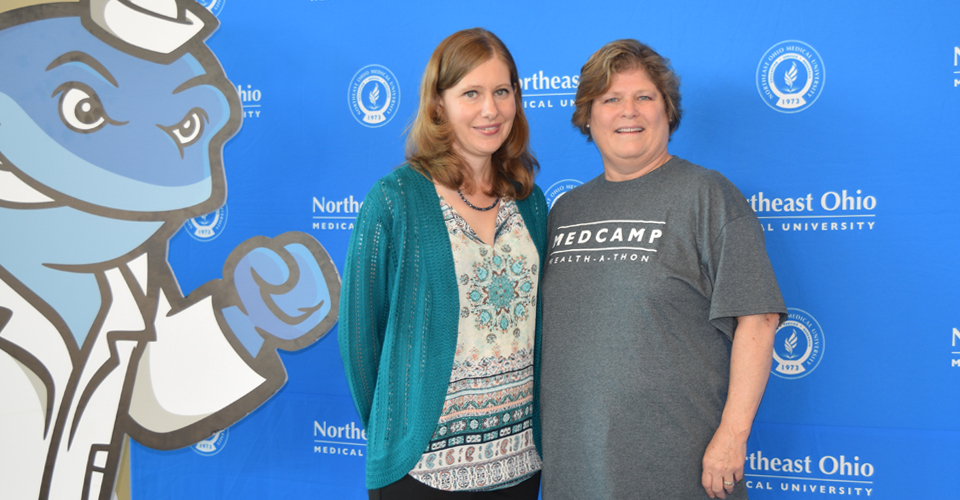 A Snapshot of Schizophrenia

When recent high school graduates and current undergraduates register for NEOMED’s annual MEDCAMP Health-a-Thon, they are challenged to create and develop unique solutions for health issues that affect their communities. With this year’s focus on mental health, author and mental health advocate Bethany Yeiser was a natural choice as a guest speaker to inspire them.

March 3, 2007, was the worst day of her life, Yeiser (pictured above at right with Patricia Thornborough, M.S. Ed.) told the students. It was also the best, because that was the day she began treatment that set her on the path to recovery.

The daughter of a pastor, Yeiser grew up studying the violin and living what most would consider a normal life. After graduating from high school, she was accepted into her dream college and became a self-proclaimed “lab rat” after discovering a passion for studying DNA.

During her time at the University of Southern California, she embarked on mission trips to Africa, Thailand, Egypt and other locations. But gradually, she began feeling paranoid that her parents were somehow ‘’against her.’’ Before she knew it, Yeiser was plagued with a debilitating obsession with the poverty she encountered during those mission trips and began having delusions about becoming the next Mother Theresa.

Her obsessions and delusions led Yeiser down a rocky path to homelessness. She found herself sleeping in the University’s library at night and trash bin diving for food during the day. Once close to her parents, Yeiser was now dodging their calls and emails. When her father flew out to California to see her, Yeiser took one look, then turned the other way and ran as fast as she could.

Two brief incarcerations later, Yeiser found herself in a church courtyard screaming at the voices in her head one day when the Los Angeles Police Department picked her up for the third and final time. Instead of taking her to jail, the officer took Yeiser to be evaluated by a psychiatrist.

With the help of the right medications, the voices in Yeiser’s head and hallucinations began to fade away. Yeiser was able to return to college, earning a degree in molecular biology from the University of Cincinnati. She later went on to write Mind Estranged, a memoir about her journey through life with schizophrenia.

Eleven years later, Yeiser is proud to be managing her disease to the point that she describes herself as recovered. Because of the sedative side effects that come with her prescriptions, she sleeps 11 to 12 hours a day; but she is able to travel and share her story.

Be the one to make a difference

Yeiser’s advice for the Health-a-Thon students? Watch your words. Be considerate to those with mental illnesses. Don’t refer to medications as “crazy pills.” Definitely don’t sport “gone mental” costumes around Halloween.

Wrapping up, Yeiser left the students with an encouraging message: Everyone is worth believing in. With proper treatment, many people can manage schizophrenia, hold jobs and reintegrate into the normal life—just as she did.

Editor’s note: The Center for Student Wellness and Counseling Services provides free and confidential counseling services for stress, depression, sexual assault, time management, suicidal thoughts and a range of other concerns. To make an appointment, call 330.325.6757 or email counseling@neomed.edu.

Not sure about counseling? The ULifeLine Self Evaluator, developed for ULifeline by Duke University School of Medicine, screens for 13 of the most common mental health conditions that college students face. This screening does not provide a diagnosis, but identifies problems that could be impacting thoughts, feelings and behaviors. The screening process also provides information on these conditions and how to reach out for help.