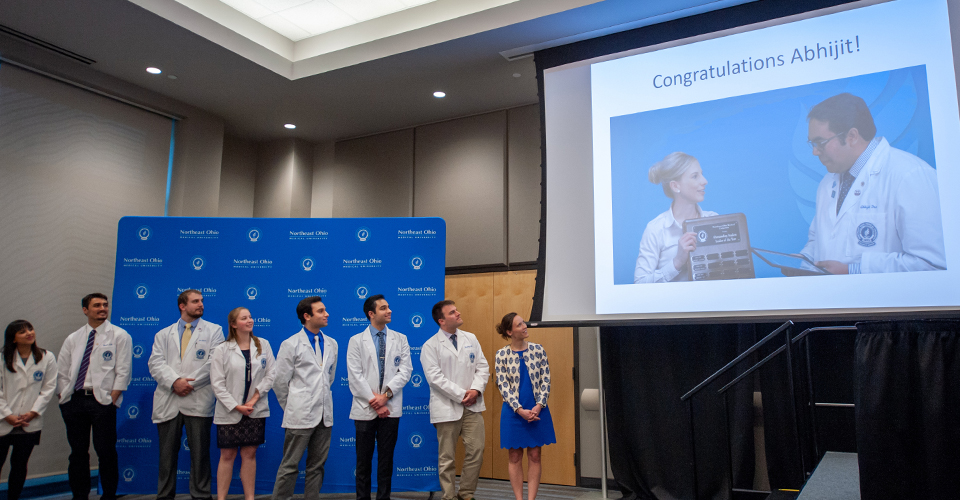 When you are as interested in as many areas of medicine as second-year College of Medicine student Abhijit Das, the student interest groups at NEOMED really come in handy.

Belonging to NEOMED’s student interest group for neurology has helped the Michigan native meet practicing neurologists and explore his interest in neuroscience during his first two years at NEOMED. And attending the American Academy of Neurology meeting this year in Los Angeles at the end of a long, cold spring wasn’t a bad thing, either, said Das in a conversation soon after the meeting, when he was still buzzing with the excitement of meeting new people and hearing stimulating talks.

An officer of 10 student organizations who was honored at the 2018 Student Leadership Awards, Das says he puts his school work first, but he likes doing things that aren’t out of a textbook. This spring, he’s getting ready to pass the baton to the rising second-years, who traditionally take the lead in student orgs after being members their first year.

“I know neuroscience is for me, but I still haven’t ruled anything else out. Part of the reason I’ve liked being involved with so many things is that I’m still getting exposed to things, especially right now when we’re still learning about everything. There are big groups here on campus that have a nice presence and they also overlap with a lot of things like with internal medicine. You get all those specialties and with neurology you get the neuroscience, too,’’ says Das.

At a so-called “Speed Dating’’ campus event, Das appreciated that the faculty were not only very kind and open but that they also took the lead. “They understand that we’re probably very nervous,’’ he says.

“I think the greatest thing with these mentors or the speakers who come to speak with us is that they really love what they do.’’

A cohort and community

Das attended Youngstown State University, where his BS/MD cohort became a source of support and friendship.

“You have this family—this group of people that support each other and are there for each other not just for the two years at undergrad but for the full six years at medical school. I had faculty that were very supportive, and especially at YSU—because it was a small school with a tight-knit biology department —I got to know everyone really well,’’ says Das.

He has also discovered new communities elsewhere, such as at the Department of Anesthesiology at the University of Michigan (Michigan Medicine), where he worked the summer after his M1 year on a research project to study whether so-called brain games have any protective effect against the common problem of post-surgery delirium in older patients. Initially, Das was apprehensive because of the university’s high profile, but from his first day in Ann Arbor, his lab co-workers were all “very casual, welcoming people’’ who made a comfortable environment for a visiting student like him.

Here in Northeast Ohio, Das has embraced the chance to get to know nearby communities by meeting with schoolchildren to talk to them about careers in health sciences—sometimes sharing ideas for careers they had never thought of.