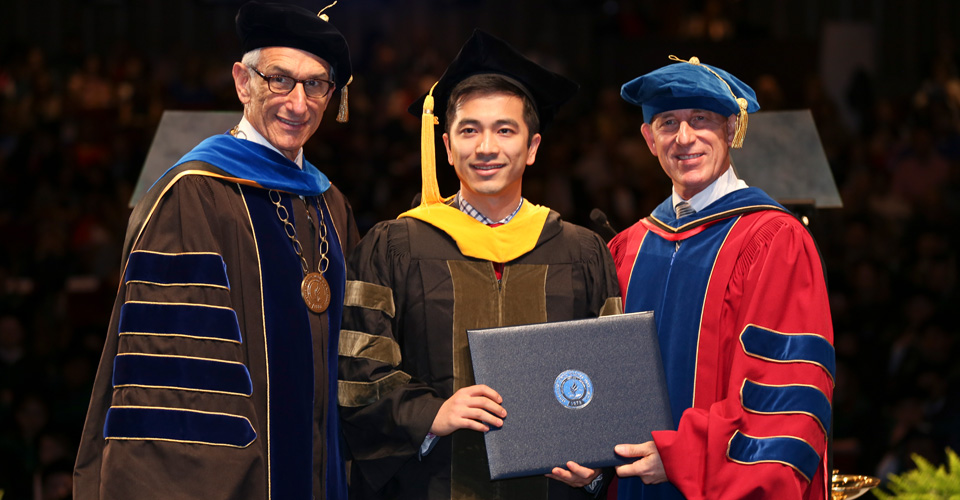 In his 16-year career at NEOMED, Walter Horton, Ph.D., vice president for research and dean of the College of Graduate Studies, has won the respect and the admiration of students and colleagues alike for his skills and acumen as a scientist and as a highly regarded member of the leadership team. As recently announced, Dr. Horton will be moving later this summer to Texas State University as the associate vice president for research and federal relations and chief research officer of the university.

Growing up, and all the way through college, Dr. Horton loved to ice skate. His avocation as an ice dancer didn’t begin until age 28, when he was recruited by a coach at the World Skating Academy in Indianapolis—which happened to be located across the street from the pharmaceutical company Eli Lilly and Company, where he was working in research. Today, Walt Horton is one of only eight people in the nation to have competed in every one of the 22 U.S. Figure Skating Association Adult National Championships since they began in 1995.

He recently talked with us about how training and competing has shaped his advice for students, as the Dean of the College of Graduate Studies. There’s a picture of me holding my ice dancing partner, June, as she glides upside down. I use this picture in an ethics class. I show the students the picture and ask, “Who has the right to be recognized for this move? Who has ownership?  Who is the most important person here?” They usually say, “You, since you’re holding her.” I say, “Do you realize how if her position isn’t just perfect, the lift won’t be perfect? And what about the coach and the lift coach and the costume designer and music coordinator? They are a whole support team making that lift look easy.”

This discussion gets people thinking about who should get credit in publications or in articles about their research findings. I say, the two people on the skating podium get authorship but the others should get acknowledgment.

Once there was a former national dance champion who showed me a step. I fell and I slammed my hand on the barrier. I was really grumpy, let me tell you. My coach looked at me and he just said, “Are you good enough at that step to be mad that you can’t do it? When you’ve done it a dozen times maybe you’ve earned it but right now you’re not good enough to be mad.” In other words, focus on the things you can control.

There’s nothing I’ve done as a scientist that comes close to the concept of teamwork that bonds two people when you’re literally inches away from someone and you are going very fast. There has to be total and complete trust that your foot is exactly where it needs to be. That’s the concept of delegating. I don’t have to think about where my partner’s arm goes. I only need to think about where my arm goes. When you skate with a partner, you learn to truly let go and trust others.

One year, our head coach was an Olympian. He would say things that he didn’t think were profound but they really were. He’d say, “You don’t have to be perfect; just don’t telegraph your mistake.”

When students talk to me about how hard it is to get a Ph.D., my response is that if it weren’t hard, it wouldn’t be worth much. Every time I’m getting ready to get out there to skate and I’m cold and my body aches, I think about people who would give anything for 30 seconds of that feeling on the ice.