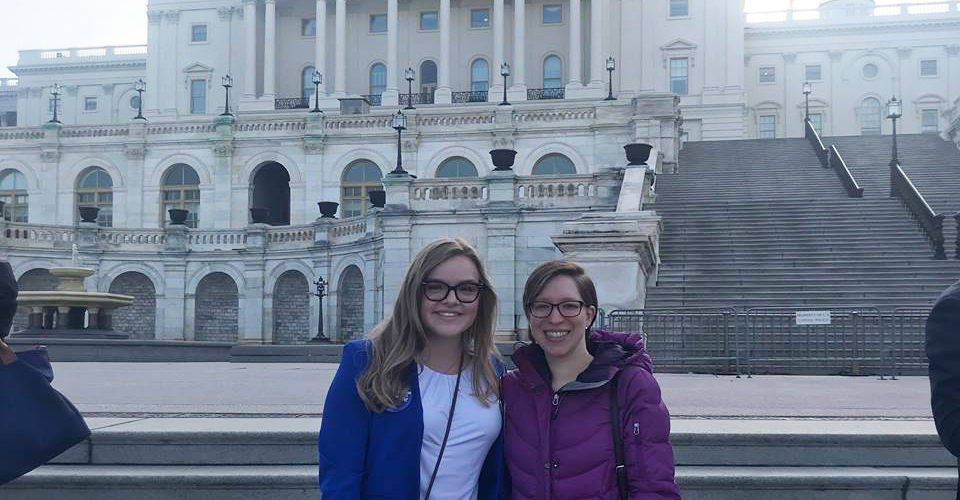 Lauren Misik, a second-year College of Medicine student (at left in photo above), attended the American Academy of Pediatrics Legislative Conference over NEOMED’s spring break. Calling the conference ‘’amazing,’’ she contributed this report.

After attending the American Academy of Pediatrics (AAP) Legislative Conference, I would say advocacy is something I’d definitely like to make a part of my future practice. This national conference was held April 8-10 in Washington, D.C. More than 350 pediatricians from all over the country attended, along with many pediatric fellows, residents and medical students. The first day was devoted to lots of pressing issues regarding child health. Presentations addressed topics such as global health, early childhood development, the effects of the opioid epidemic on children, federal nutrition programs, advocating for immigrant children, maintaining access to health insurance and shortages of pediatric subspecialists.

The second day was concerned with the topic of gun safety as a public health issue affecting our children. We learned the ins and outs of advocacy work—how to get involved at both the state and federal level. We also learned quite a bit about gun violence and how to communicate with legislators. On the third day, all 350 of us were bussed to Capitol Hill to meet with staffers for both of our Ohio senators as well as our district representatives.

The AAP came up with three “asks”:

It was a very powerful experience for me to talk with our lawmakers and to listen to numerous pediatricians from around the country who have cared for many children that have fallen victim to gun violence. I am hoping to get my representative—Tim Ryan (OH-13), whose staff I met with—involved with NEOMED somehow in the next school year. It would be great for Congressman Ryan to perhaps speak on campus regarding the opioid epidemic, healthcare coverage, and other pressing items.

How to get involved

I am an officer of the American Academy of Pediatrics-Pediatric Action Club (AAP-PAC) pediatrics interest group here at NEOMED; however, I discovered this conference on my own. I became a student member of the AAP online and received an application to apply for a scholarship to attend the conference through an email. I submitted a few essays about why I was interested in getting involved with advocacy, and I was lucky enough to be chosen as one of the recipients!

I plan to stay involved by attending the Ohio AAP chapter meeting in September of this year to continue developing my advocacy skills. I believe advocacy is especially essential in the field of pediatrics, because many times children don’t have a voice.