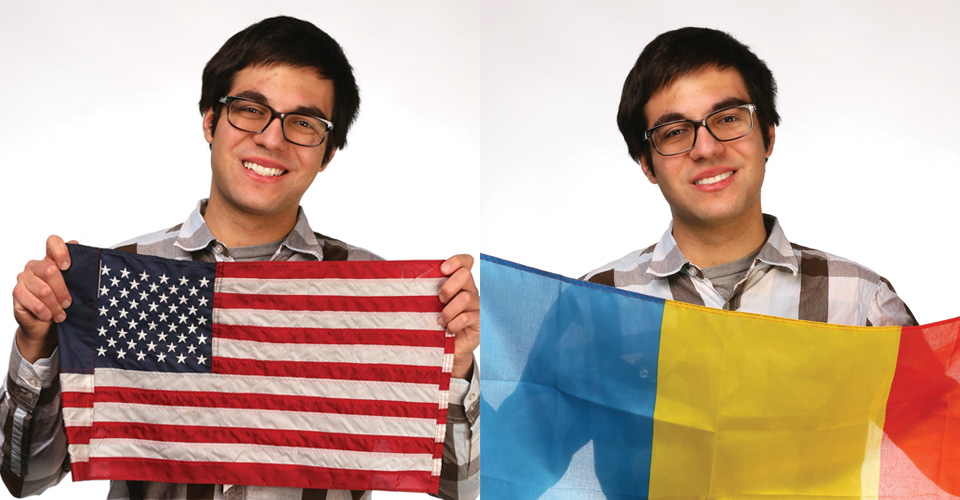 ADVOCATING FOR OTHERS THROUGH MEDICINE

Since Kyle Bertea’s adoption from a Romanian orphanage at the age of one, he has built his own world of compassion. Instead of falling into the troubled life that his early years foreshadowed, Bertea—now a third-year College of Medicine student—has pursued his dreams with determination and success.

From a young age, Bertea understood his good fortune at escaping the orphanage. He often wonders about the outcome of the hundred-some children with whom he spent his first year. Confined to cribs, the orphans rocked themselves back and forth for stimulation, due to a lack of one-on-one care and attention from the limited staff.

Rather than trying to block his painful memories of Romania, Bertea has decided to embrace them by advocating for human rights through medicine.  He envisions himself as a family physician, using his life experiences to empathize with what his patients are experiencing. Through various mission trips to countries overtaken by poverty and through courses at NEOMED, Bertea has learned the importance of learning motivational interviewing and to communicate with compassion. It’s no wonder that he was quick to volunteer for the University’s I am Diversity campaign.

“Learning how to interview is so important to being a physician. There’s so much science in medicine, but so much of what we do is not about identifying disease states,” says Bertea. “It’s not just telling a patient they have a certain condition; it’s taking science and using it in a way that benefits people directly.”

Outside of class, you can find Bertea advocating for human rights and ethics in medicine through student groups. He is president of Notions, a group that discusses and reviews medical cases from the New England Journal of Medicine to expand upon the ethics and philosophy training students have already received in courses such as Human Values in Medicine. Bertea is active in the bioethics club and last spring, he participated in the Sixth Annual Bioethics and Humanities Conference, held at the NEOMED Education and Wellness (NEW) Center.

He doesn’t take it for granted that NEOMED places a high premium on how to doctor—that is, to see the patient as a human being, not simply a case.  “The training on how to interact with patients is really good here,” says Bertea. “I admire how much they do to train us.”