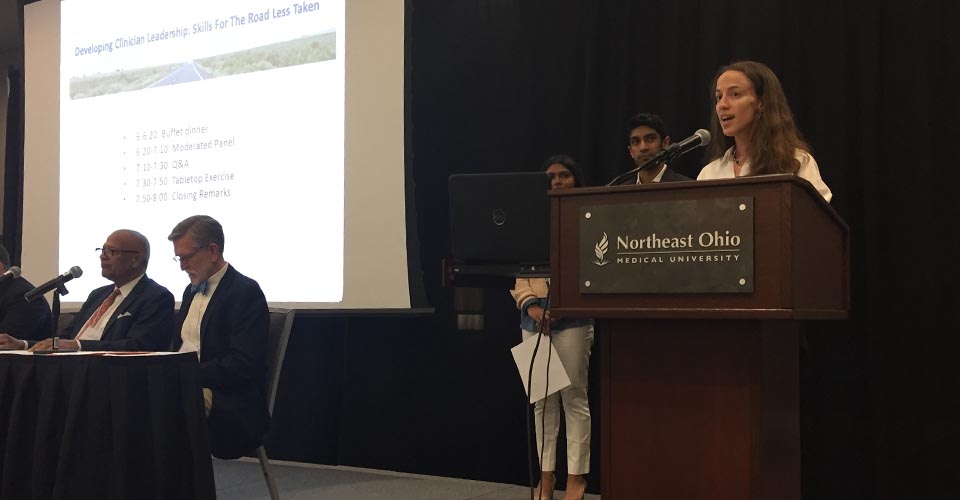 Advocating for the Patient: Katherine Joyce

By the time third-year College of Medicine student Katherine Joyce matriculated at NEOMED, she had already worked with young people in Boston to prevent community violence; done malaria research in India; and taught EMS classes in the Independent Republic of Somaliland. Lessons learned guided her to study medicine. As Joyce puts it, “Even if you address the political, economic and social issues surrounding the public, if individuals don’t have their health, they are limited in improving themselves and their communities.’’

Joyce added, “I think what resonated with me the most in working in underserved areas was the fact that many of the poor outcomes have nothing to do with the personalities of the people, or their values. It’s truly a question of resources in many of these cases. I took away how incredibly lucky I am—and I did not earn the luck I’ve been given,’’ says Joyce.

Joyce grew up in a dual-physician family. Her mother, raised in a rural area, was not only the first in her family to go to college but also to medical school. “My mom is an incredible woman, but she is the exception and not the rule. Luck, life experience, financial resources and social capital can significantly impact a student’s ability to matriculate into and succeed in medical school or life,” notes Joyce. She herself is a non-traditional student, having earned a master of public health degree and worked in Boston before completing a post-baccalaureate at Cleveland State and matriculating into NEOMED through the NEOMED-Cleveland State University Partnership for Urban Health.

“Overcoming challenges can make us stronger, but some individuals face a steeper uphill battle than others through no fault of their own. Seeing friends and family overcome such barriers is inspirational, but watching the difference in support (be it mental health, financial or otherwise) is infuriating,’’ says Joyce, adding that it bothers her when she observes that the support offered is patronizing.

“I think that it is important for medical students and health professionals to be acutely aware of the fact that people typically don’t need handouts; they need appropriate support to reach their goals. I think taking a non-patronizing, non-patriarchal approach to supporting other fellow humans is very important.”

Joyce applauds NEOMED students for evolving and adapting their ability to address principles of social justice. She has worked with NEOMED student organizations to put her own passion for social justice into action and is excited to see upcoming students improving upon last year’s efforts.

As an example, she points to the current NEOMED chapter of the American Medical Association, applauding it for building upon last year’s progress. While her own class hosted a few panels, wrote resolutions surrounding social justice issues and collaborated with the Akron Public Schools, the current class has added policy workshops and visits with legislators. “It’s been wonderful to see younger classmates addressing social justice issues within and outside of NEOMED. I hope this dedication continues to grow at our school,’’ says Joyce, who has also written for NEOMED’s Ignite magazine and elsewhere in the medical community on topics such as the lead crisis in Flint, Michigan.

As a third-year student on rotations, Joyce has appreciated learning from the physicians who adapt care to individual patient needs. For example, one physician said they’d like to do a surgery soon and the patient says, “Well, I’m getting married next week.’’ The care plan was altered to accommodate the patient.

“Maybe holding off on a procedure isn’t medically ideal, but if there is room for compromise, it’s important that both the clinician and the patient’s desires are accommodated,’’ says Joyce.

She’s looking forward to the increased responsibility she’ll have next year as a fourth-year student doing clinical rotations. Taking ownership for any mistakes and being held accountable is ‘’somewhat terrifying,’’ she says, adding, “but I’m excited for that challenge.’’