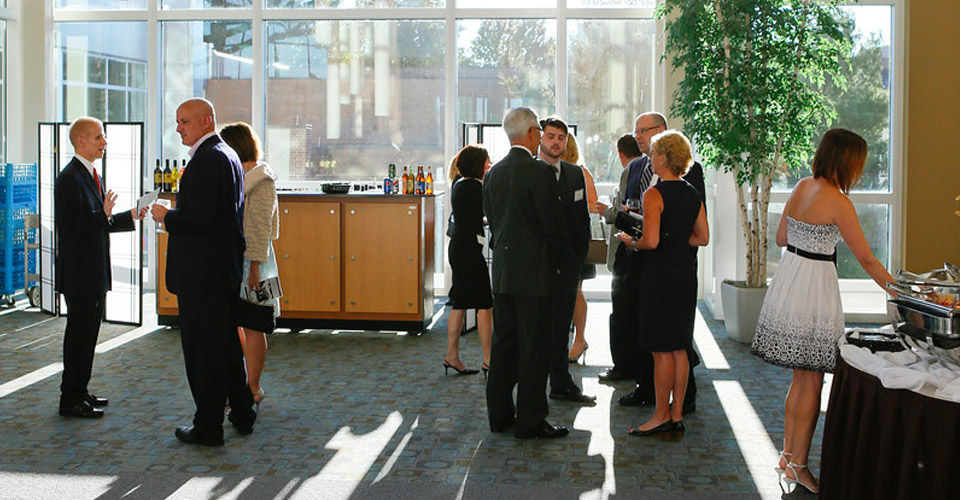 There was plenty to celebrate on Saturday night when more than 100 alumni and guests gathered for NEOMED’s second annual Alumni Association reunion and awards dinner. Among the hugs, attendees also shared their excitement about the advancements being made at NEOMED that offer alumni more opportunities than ever: public-private research/businesses partnerships at the REDIzone, mentoring opportunities, external experiences and more.

At a dedication ceremony preceding the dinner, everyone had the chance to salute Dr. Albert Cook II (’90) and Dr. Paul Cook (’91) for a gift that resulted in University Hall being named in the brothers’ honor as Cook Alumni Hall. The Hall is located on the University’s campus in the NEW Center, a multi-use facility that serves students, the University and the public.

The awards dinner recognized four honorees, including Dr. Robert Liebelt, whose former student Joseph Zarconi, M.D. (’81) said fondly that he ‘’worked tirelessly for all of us’’ and ‘’will always be known as ‘my dean.’’’

Here’s a look at the evening’s honorees:

At a meeting before the dinner, the alumni board formally endorsed the Shine On capital campaign, which aims to raise $40 million by June 30, 2018. The board also agreed to establish an Alumni Association endowed scholarship, in conjunction with the campaign. For some lucky students down the road, that will be more cause for celebration.