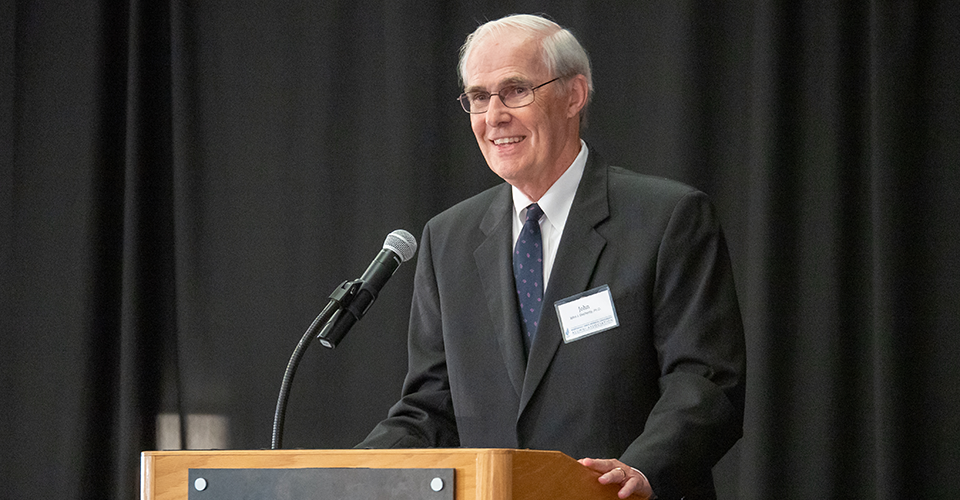 It was a night for celebration when alumni gathered Saturday, Sept. 28, at the NEW Center Ballroom for the fifth annual Alumni Association Reunion and Awards dinner. Adding to the festivities, a selected group of current NEOMED students was invited to attend this year.

“It is our hope that hearing from our award winners will inspire these students to continue to excel at their studies so one day they may be recognized as distinguished alumni,” said Corrie Stofcho, M.D. (’06), president of the NEOMED Alumni Association.

Three honorees, two of them alumni, were recognized at the dinner. Albert Cook II, M.D. (’90), has served as chair of the NEOMED Foundation board and played an important role in helping the University exceed its goal for its first comprehensive campaign, completed one year ago. Presented with the Distinguished Service Award, Dr. Cook thanked many people currently and previously at NEOMED who have served as mentors and inspiration.

John Docherty, Ph.D., a former professor and chair of the Department of Microbiology and Immunology, received the Lifetime Achievement Award. Renowned for his work on the herpes simplex virus, he was also influential in shaping the curriculum at NEOMED.

Being with the students was fun and always an adventure, Dr. Docherty told the audience: When the students were in the lecture hall, it was all business, but after class, all bets were off.

To gales of laughter, he told the story of how he had gotten a follow-up call after the routine pre-op lab test for his own hernia surgery. A caller who identified themselves as being from the hospital’s laboratory said they had found some irregularities with his blood work. Don’t worry, they said; a larger surgical suite had been scheduled and a second surgical team would be ready to take over after the first surgery was complete.

“What are you talking about?” Dr. Docherty remembered responding, befuddled and dumbfounded.

“We can’t discuss this with you because of patient confidentiality, but your primary care doctor will call you later to discuss options,” said the person on the other end of the line and hung up.

Moments later, Dr. Docherty received a laughing confession from the students who, unbeknownst to him, had spotted him heading to the surgery appointment and made the prank call.

“Being a physician is the greatest honor of my life,” said Mona Vishin Mangat, M.D. (’96), recipient of the Distinguished Alumni Award, who thanked her parents and sister for the examples they set for a life of purpose.

“Knowing your patient lives in a food desert, knowing that your community has lead-contaminated water running through its pipes, knowing that the air your asthmatic is breathing is of the poorest quality, or knowing that your patient chose not to fill their prescription this month because they had to make a rent payment, the list goes on and on,” said Dr. Mangat, pointing to these realities as opportunities for physicians to effect change.

Jacob Sweet, a second-year College of Pharmacy student who attended, commented afterward, “I had no idea that Dr. Mangat was working so hard on the ACA, and was at the White House with President Obama. It was very inspirational, and it was encouraging to know that even though we study here in a small area of the world, we can really have an impact on the whole nation.”