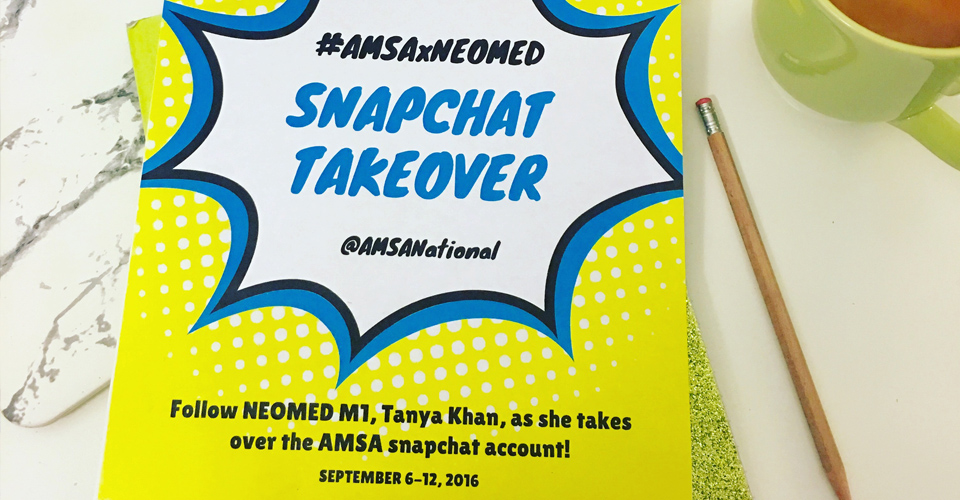 A first-year College of Medicine student will bring NEOMED its first Snapchat takeover the week of September 6-12.

Tanya Khan (M1) serves as the national community and public health advocacy coordinator for the American Medical Student Association (AMSA)—one of the groups featured at the Student Organizations Fair held Sept. 1 at the NEOMED Education and Wellness Center patio from 5:15-6:30 p.m.  Khan’s goal is to recruit new members by demonstrating the benefits available to NEOMED students, such as networking opportunities and being empowered to be advocates for issues they care about. For Khan, hot topics are the global issues of women’s health and education as well as environmental health.

“Over the summer I worked at a public health department and saw firsthand how many people are touched by public health, whether it is through providing vaccinations or working to get fluoride in the water,” said Khan, whose AMSA connections landed her the internship.

Khan suggested the takeover idea, which will focus on week two of medical school (“Prologue”), in which the public health topic of obesity is covered. Khan, who just finished her C3 year in the B.S./M.D. program at Kent State University, plans to feature the life of a new medical student—herself—through the popular social media platform called Snapchat, on which images disappear 24 hours after being posted as part of a Snapchat story. A takeover is a day-by-day series of image stories on any topic of an individual’s choosing.

“I want to post pictures of NEOMED facilities, academics, student life and the collaboration between medicine and pharmacy students, to promote AMSA and NEOMED ideals,” she said.

A previous AMSA member at KSU, Khan looks forward to becoming a member at NEOMED and hopes to inspire other students as well.