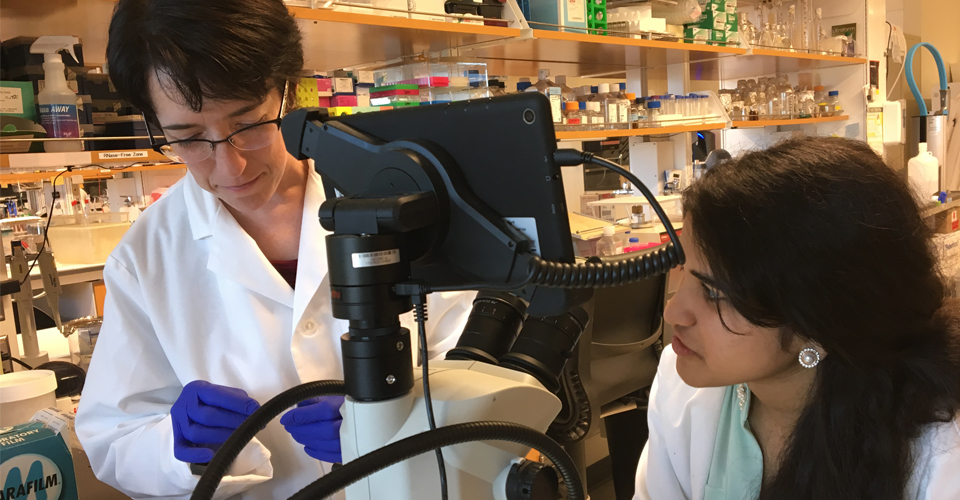 An Eye on Her Future

If you walked into the glaucoma lab of Denise Inman, Ph.D., you might see one person who looks younger than the rest but is dissecting retina and tracing cells alongside everyone else. That’s high school intern Neha Shah, a senior from Bio-Med Science Academy, a STEM+M high school that was recently ranked as the 19th best high school in the state of Ohio. Shah is interning with Dr. Inman as part of her senior apex project, in which students gain experience in their desired field through an internship or research project.

Preparation for the project starts junior year, which is when Shah clicked through the Neurodegenerative Disease and Aging research page on the NEOMED website and stumbled upon one of Dr. Inman’s papers about glial cell manipulation with respect to glaucoma. As a participant in the Brain Bee and anatomy event for Science Olympiad, Shah was familiar with glial cells, though she didn’t know what they had to do with glaucoma.

“I found the idea of manipulating glial cells fascinating. After reading the paper, I realized that glaucoma wasn’t what I thought it was. An increase in intraocular pressure is part of it, but there is so much more than that,” she says.

A few emails later, Shah began job shadowing in Dr. Inman’s lab last August and realized it was where she wanted to intern. Shah was already familiar with the NEOMED campus, because Bio-Med students walk across it every day to eat lunch at a campus café, and they frequently interact with faculty, staff and students at both Bio-Med and NEOMED presentations and events.

Interning with Dr. Inman allows Shah to learn from a seasoned researcher the difference between a high school lab, where the activities are predictable, and a professional lab, where the unexpected can happen. Shah says this was exactly what she was looking far: to see the entirety of the research process. Most high school labs cut the process short, omitting the stages of interpreting the data and determining its potential application to society. Working in Dr. Inman’s lab gives Shah the opportunity to experience these stages and more. Shah says she loves going into the lab to contribute to Dr. Inman’s work in a hands-on way, by dissecting mice retinas and tracing endoplasmic reticulum in axons and converting them to 3D models.

Originally, Shah wanted to go into clinical medicine, but after her two months in the lab, she’s leaning towards the research side of medicine. When she said that to Dr. Inman, the researcher responded, “Why not both?”  (Dr. Inman, the director of the Integrated Pharmaceutical Medicine program at NEOMED, is the keynote speaker for the Vision Research Scientific Forum being held at NEOMED’s Cook Alumni Hall from 12:30 to 3:30 p.m. Nov. 17.)

As a high school senior, Neha Shah has plenty of time to decide if she wants to pursue a dual M.D./Ph.D. at NEOMED, which would prepare her as a physician-researcher. For now, she’s got a great head start on choosing a career.