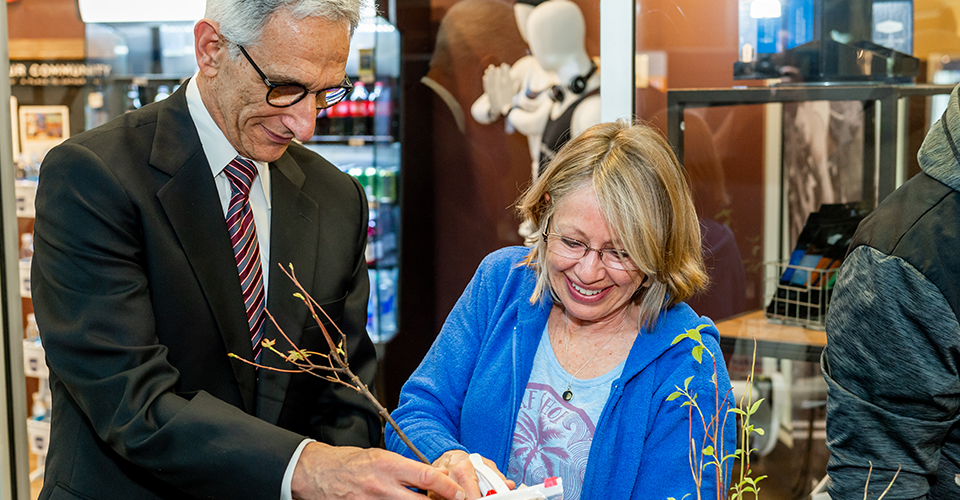 The NEOMED community loves to grow things. That was clear at last year’s celebration of national Arbor Day (observed on the last Friday in April), so this year, Dale Hluch, director of campus operations, and his tree committee doubled their supply of free tree seedlings to give away in a first come, first served event beginning at 10 a.m. Friday, April 26.

NEOMED was recently designated with Tree Campus USA status by the National Arbor Day Foundation for its efforts to promote the growth and maintenance of healthy trees. The Arbor Day event was sponsored by the University’s Tree Campus USA committee.

The pleasure of planting

Before the event began, in the atrium of the NEW Center, a line had formed at the tables covered with white buckets holding each of the varieties. One eager shopper who came a few minutes later was community member Mary Beth Shears, who said she had read about the giveaway in the paper and stopped by in hopes of getting a hemlock.

“I just like playing in dirt and growing things,” said Shears. Clearly, she’s not alone. Workers said that magnolia, Redosier dogwood, hemlock and red maple had flown out of the buckets in the first half hour, and within two hours, all 200 free seedlings had been taken.

One helper on hand for the event was President Gershen, who took a break from handing out seedlings to pick out a red cardinal sugar cookie baked by tree committee volunteer Diane Conyers-Rizzo. She was also giving away cookies she had decorated with birdseed, for people to put out for birds in their yards.