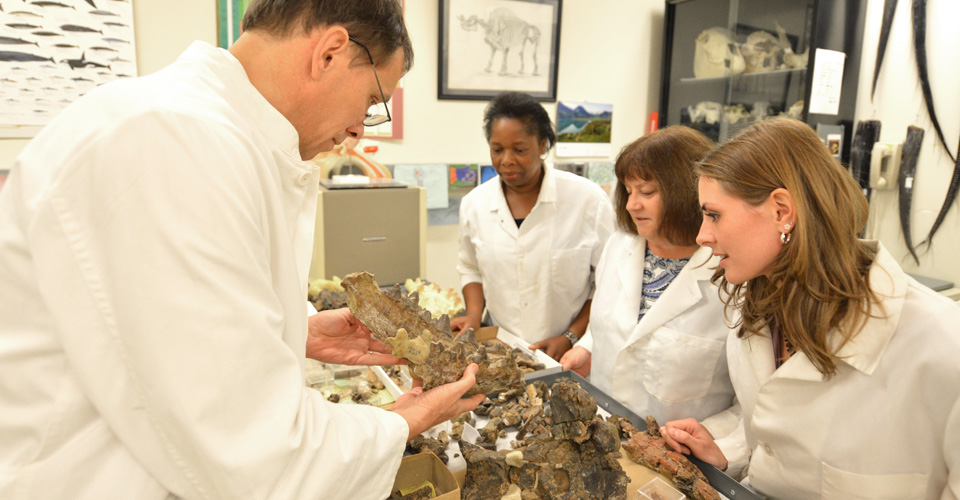 Baleen and Fossils and Bears (Oh My!)

Hans Thewissen, Ph.D., Ingalls-Brown professor of anatomy, studies modern baleen whales. A generous award from the Louise H. and David S. Ingalls Foundation will help him link his research with fossil evidence to determine the origin of baleen—the unique filter system inside a whale’s mouth.

In support of a project titled “Oligocene Whales from Alaska: Collection of Fossils in the Poul Creek and Yakataga Formations of Icy Bay on Alaska’s South Coast,” the foundation has granted Dr. Thewissen $10,000. Dr. Thewissen will travel to Wrangell-St. Elias National Park in southern Alaska, where he hopes to discover fossils to support his research on modern baleen whales. “It would be cool to find fossils that document the same process, but from a fossil perspective,” says Dr. Thewissen.

He is grateful for the funding recently announced by Bobbi Brown, Ph.D., president of the Shaker Heights-based Louise H. and David S. Ingalls Foundation, which named the chair he holds at NEOMED.

The Pulse recently sat down to talk with Dr. Thewissen. After receiving an Alaskan geography lesson, complete with photos from Dr. Thewissen’s previous trips, we were ready to learn more about his upcoming trip.

The national park in which Dr. Thewissen will take his one-month trip is filled with swamps and trees. While most people might be drawn to the beauty of this vegetation, Dr. Thewissen is more interested in two areas of outcrops–areas of exposed rock that are perfect for collecting fossils.

The researcher discovered the outcrops by doing two days of scouting. “I’ve done a lot of fossil work in Pakistan and India. Those rocks are between 49-42 million years old. These rocks are a little younger,’’ says Dr. Thewissen, explaining, “49-42 million years ago is when whales originated. They were land mammals and then they became swimmers.” (Think Nate, the whale skeleton on display on campus who has become NEOMED’s mascot.).

“Between 40 and 30 million years ago, these whales developed baleen. That’s the period I’m interested in pursuing,” Dr. Thewissen says.

The researcher has had a few scary encounters with polar bears during his trips to northern Alaska. “There are a lot of polar bears, which are not fun animals. They look cuddly, but that’s not the way they think of themselves,” says Dr. Thewissen. We were relieved to hear that there are no polar bears in southern Alaska, until Dr. Thewissen reported that the grizzly bears found there are much worse.

“In this last trip, we spent two nights and near our tent we had tracks of both grizzly and black bears,” says Dr. Thewissen. “We will need to put a bear fence (electrified wire) around the tent and walk around with bear spray.”

Not to be confused with bug spray, bear spray is a very strong pepper spray. Dr. Thewissen isn’t going to the forested areas, so he’s not worried about bear encounters. Rest assured, he has a guide who knows the area and is prepared for any incidents. If Dr. Thewissen succeeds in find a connection between old and modern whales, there’s no telling what the future of this fossil project might be.

-- Gabrielle Biltz is a senior at Bio-Med Science Academy and an intern in the NEOMED Office of Public Relations and Marketing.