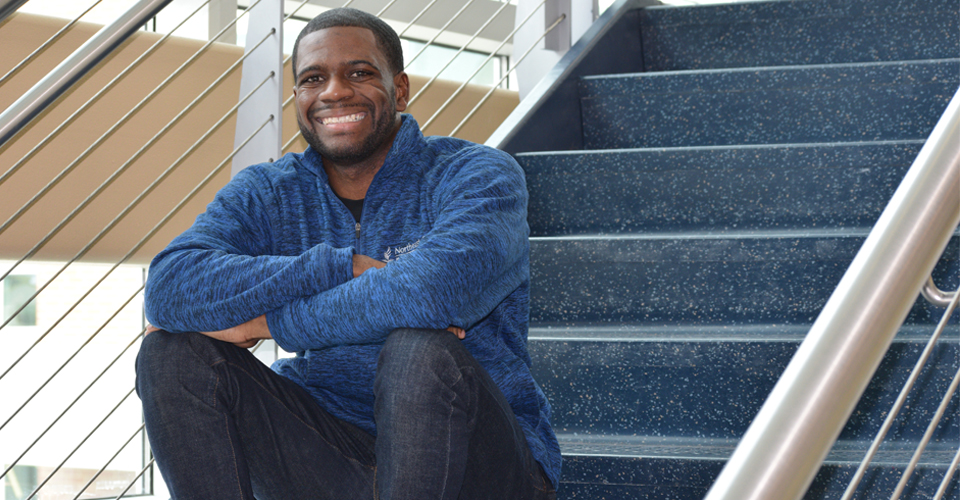 Until Jashan Jabbaar-Hill came to NEOMED, he had never seen himself as a role model. But after mentoring future non-traditional and underrepresented diverse students through the Urban Health Fellow Program at Cleveland State University, the second-year College of Medicine student has come to see himself that way. Based on the impressive way that he has supported the needs of these potential students, he was nominated for a Community Builder award at the 2017-18 Valuing Community and Diversity award presentation.

“The most meaningful thing that’s happened to me since being at NEOMED is being looked up to as a mentor or role model. Just having an opportunity to pave the way for future students—I feel like that’s a blessing in itself,’’ says Jabbaar-Hill.

Jashan’s mother was the first in the family to graduate from college. When he continued on to study medicine, he felt the whole family’s enormous pride and support.

Jabbaar-Hill empathizes with students he meets at Cleveland State who, because of their financial situations, need to work at the same time they take pre-med classes. “I feel like it is very hard to work and balance the great grades you need to stay a competitive student for NEOMED or any other medical school, as well as study for the MCAT. That’s been the biggest barrier for a lot of our Cleveland State program students,’’ he says. Jabbaar-Hill is eager to help these students organize their study habits to make the most of their limited time.

A passion for serving and teaching

At NEOMED, this student has found a good match for his own values.

“I really love NEOMED’s passion for serving vulnerable populations,’’ says Jabbaar-Hill. As someone from inner-city Cleveland, he sees the irony in the fact that many people living near world-class health care systems don’t have access to health care. While these communities are plagued with chronic disease, Jabbaar-Hill knows that such diseases are preventable. He dreams of the day when he is a pediatrician with the training to teach preventive care.

For now, he is working to activate change through his role as vice president of the Student National Medical Association, an organization for underrepresented minorities in medicine. Through his leadership and mentoring, he is helping to open doors.