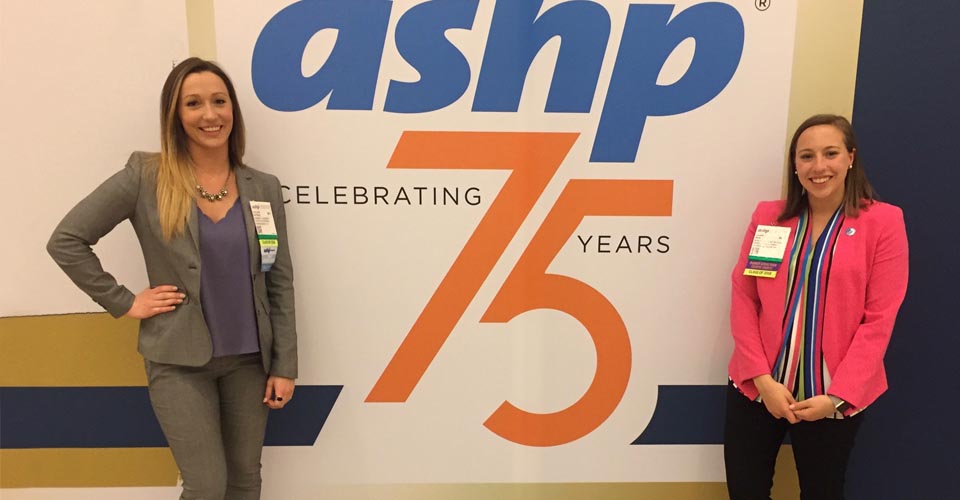 Becoming a Voice for Others

Fourth-year College of Pharmacy student Laura Nice has always been sure of her career choice. Now, she is using that path to advocate for others.

Choosing to attend NEOMED did more than bring Nice close to home and many local hospitals. It also set her on a trajectory of success, launched with the help of a few pharmacy organizations and mentors.

Nice (shown at right in photo above) took an interest in the University’s Student Society of Health-System Pharmacists (SSHP) chapter, which inevitably lead to mentoring and leadership roles. In 2017, Nice was one of 11 student pharmacists in the country honored with the ASHP Student Leadership Award for her achievements in campus and pharmacy practice leadership.

When the annual call for nominations for the American Society of Health-System Pharmacists (ASHP) Pharmacy Student Forum Executive Committee became available, Jaclyn Boyle, Pharm.D. (’12), an assistant professor of pharmacy, and Chris Paxos, Pharm.D., an associate professor of pharmacy, encouraged her to apply. Nice is now one of five student pharmacists from across the U.S. appointed by the ASHP president to serve on the executive committee. The group acts as a voice for fellow student pharmacists and is a liaison for the organization’s six student advisory groups.

Aside from countless networking and educational opportunities, Nice notes, “As student pharmacists, we often get caught up in learning dosages and drugs. Being involved in ASHP has given me a broader perspective on pharmacy practice.”

She may not have anticipated stepping into a national leadership and advocate role, but Nice has embraced it and even found additional opportunities to exercise her voice. One of her favorite rotations was a visit to ASHP headquarters in Bethesda, Maryland.

“It was a special elective APPE rotation because I got to experience policy week and advocacy day at Capitol Hill. I really got the chance to learn the ins and outs of pharmacy,” says Nice.

As for now, Nice is back in a clinical setting where she is learning the different roles of a pharmacist. Her current rotation at Cleveland Clinic Medina Hospital is giving her experience in dosing, counseling stroke, pneumonia and heart failure patients, and more.

While she looks ahead to residency, Nice is using her last few months on the ASHP Pharmacy Student Forum Executive Committee to make a difference.