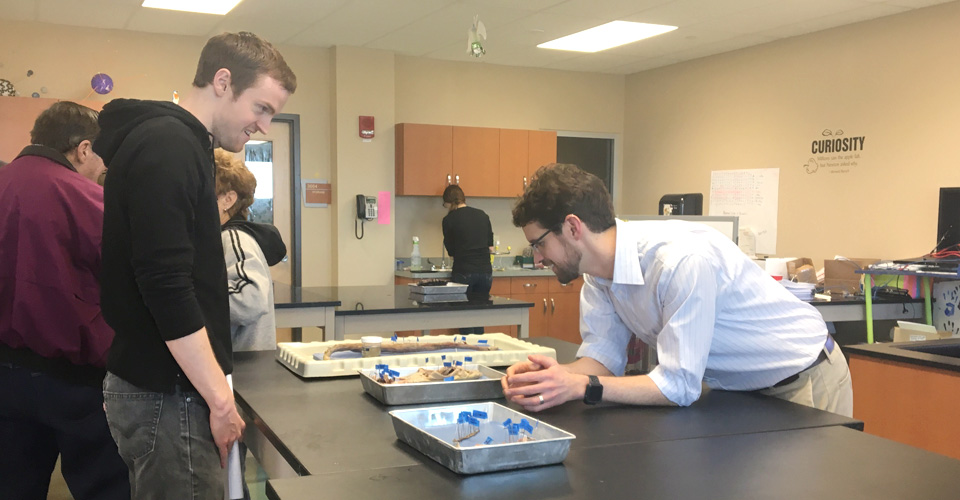 What does it mean to be human?

That’s a question that team teachers Jesse Young, Ph.D., associate professor of anatomy and neurobiology at NEOMED, and Laura Sass, biology instructor at Bio-Med Science Academy, posed to Bio-Med students who had signed up for an elective January class about primates. At a recent Gallery Walk open house to showcase the class and other January electives, Eleanor Huntley, a junior at the Academy, said, “It sounded really cool because this is the group humans fit into. That was the point of the first day of class.’’

During the three-week class, students learned about the behavior and classification of primates, as well as the history of monkeys known as New World (originating in South America) and Old World (originating in Africa and Asia). For Huntley, an especially memorable aspect of the experience was the way that Dr. Young explained the basic structure of primates by showing students a lemur skeleton, as well as dog and cat skulls.

Dr. Young and Noah Dunham, a postdoctoral fellow in the Department of Anatomy and Neurobiology, discussed real-world opportunities to not only explore and explain primates, but the sciences in general. These speakers are what brought the class to life for Charlotte Scherer, a senior at Bio-Med. She said, "It was interesting to hear what a field primatologist did and how that related to what we had been learning about not only in this class, but all the science classes I’ve taken so far."

As their final project, each student had created a website about a specific monkey to present during the Gallery Walk. Dr. Young joined the public in circulating around the room and listening to conversations about orangutans, red howler monkeys, and whatever else the students had learned for their presentations. "It’s fun to hear what they have to say," said Dr. Young afterward.

Why did Dr. Young choose primates as his teaching focus?

"To quote the famous biologist Theodosius," he said, "'Nothing in biology makes sense except in the light of evolution.' We won’t really understand where we are now, even down to our medical ailments, unless we understand we came from: lemurs, monkeys and apes.

"And, primates are just interesting—they’re among the most charismatic group of mammals out there."