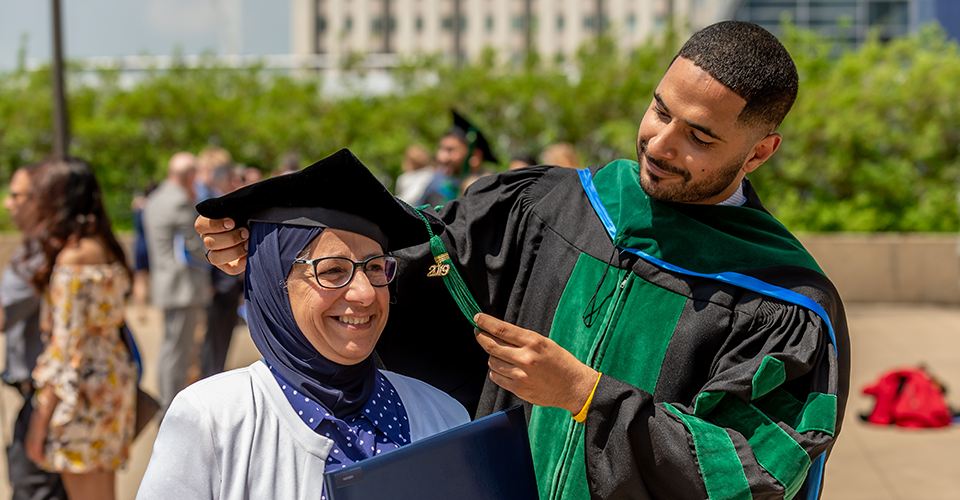 Celebrating Graduates of the Class of 2019

Joy, relief, a combination of both? Emotions run high at graduation ceremonies, and NEOMED’s Commencement on Saturday, May 18, was no different.

The day’s keynote speaker, Susan Dentzer, quoted the physician-author Lewis Thomas (The Lives of a Cell), who once wrote (in a different  context), “Statistically, the probability of any one of us being here is so small that you'd think the mere fact of existing would keep us all in a contented dazzlement of surprise.” Dentzer returned to that image throughout her talk, using it to cast a sense of wonder and appreciation of all that had gone into bringing the students and their loved ones to the University of Akron’s E.J. Thomas Hall to celebrate success on this day.

For its 39th Commencement, NEOMED granted 235 degrees to its newest physicians, pharmacists and health professionals in the fields of public health, health-system pharmacy administration and integrated pharmaceutical medicine – and to the first four recipients of its College of Graduate Studies’ master’s in medical ethics and humanities.

With the Class of 2019, NEOMED’s alumni community now numbers 4,616 health care professionals. Mark Hostettler, M.D. (’84), president of the Alumni Association, welcomed the newest additions at the end of Saturday’s program when he invited them to make their graduation official by moving the tassels on their caps from right to left.

The message of appreciating successes along the way was a consistent one ― from Jay A. Gershen, D.D.S., Ph.D., whose welcome marked his 10th and final commencement as the president of NEOMED, to the addresses by deans of the Colleges of Pharmacy, Richard Kasmer, Pharm.D., J.D., and Graduate Studies, Steven Schmidt, Ph.D.

Although she could not attend Commencement in person, because she was attending her daughter’s graduation, Elisabeth Young, M.D. (’85), dean of the College of Medicine, delivered her message to the graduates through a pre-recorded video.

A contented dazzlement of surprise

Keynote speaker Dentzer, a visiting fellow at Duke University who is a health care policy expert and commentator on platforms include PBS NewsHour, told the students to remember that they are special. With a twist of science humor, she asked them to remember the other gametes that didn’t combine to be born into their families and find their way to NEOMED and a future in health care. Dentzer mentioned that the SOAR Student-run Free Clinic at NEOMED had received a 98% approval rating from its patients, and said she hopes that NEOMED grads will always hold onto the kind of excitement – that “contented dazzlement of surprise” — that they get from helping people solve their problems at the clinic.

The many contributions and successes of Richard Lewis, who recently retired as vice president for external affairs and secretary to the NEOMED Board of Trustees, were recognized by the conferral of an honorary degree. Robert Klonk, chair of the board, introduced Lewis, who spent nearly half a century in the health sciences and left a lasting impact on the University.

One of Lewis’ more noticeable achievements was in developing and securing approval from the Ohio General Assembly to change the institution’s name to Northeast Ohio Medical University. President Gershen presented Lewis with a Doctor of Science Honoris Causa “in recognition of his lifelong dedication to the Area Health Education Centers, medical education, research and community service; as well as for his advocacy and significant support of the growth and effectiveness of Northeast Ohio Medical University.”

As calendars aligned once again, the Class of 2019 celebrated on the same day as Armed Forces Day. While recognizing all current and former members of the military, NEOMED honored nine military graduates who plan to immediately use their medical skills as doctors in our country’s armed forces.  The officers were recognized by Major Scott D. Allen, chief of public affairs, 910th Airlift Wing, Youngstown Air Reserve Station, U.S. Air Force.

Whether they plan to serve their country or in their communities, one thing remains the same — their commitment to their patients.