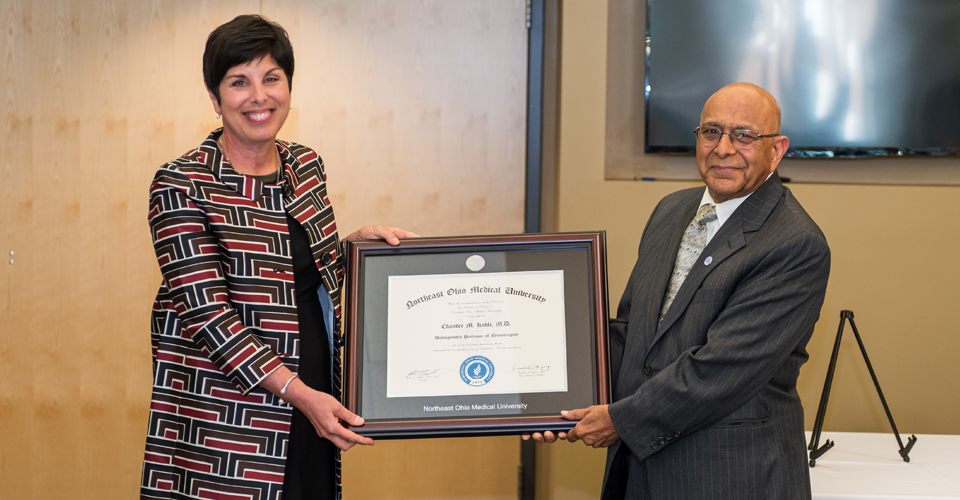 Family members, friends and longtime colleagues gathered in the  NEW Center Wednesday, Sept. 8, to recognize Chander Kohli, M.D., for his exceptional contributions to the University.

The festivities officially marked Dr. Kohli’s designation as Distinguished Professor of Neurosurgery — the highest level a professor can achieve, and the first such title to be awarded by NEOMED in the area of neurosurgery.

The event also marked Dr. Kohli’s completion of two nine-year terms on the Board of Trustees.

Along with Dr. Kohli’s many years of academic service to NEOMED, he and his wife, Karen, have been major philanthropic supporters of the University – including a gift to advance technology in the library, which was renamed the Aneal Mohan Kohli Academic and Information Technology Center in honor of the couple’s son.

John Langell, M.D., Ph.D., M.P.H., M.B.A., offered highlights of Dr. Kohli’s early years, beginning with his journey to the U.S. from India with a grand total of $8 in his pocket. Dr. Langell outlined the physician’s distinguished career as a neurosurgeon in Youngstown. Michelle Mulhern, M.P.A., chief of staff and secretary, Board of Trustees, read a proclamation about Dr. Kohli that provided ample evidence of his community service as well as his clinical contributions. In a final gesture of gratitude, Dr. Kohli was presented with a treasured sculpture of Hippocrates – one that an artist had modeled after the statue that stands in NEOMED’s original courtyard.