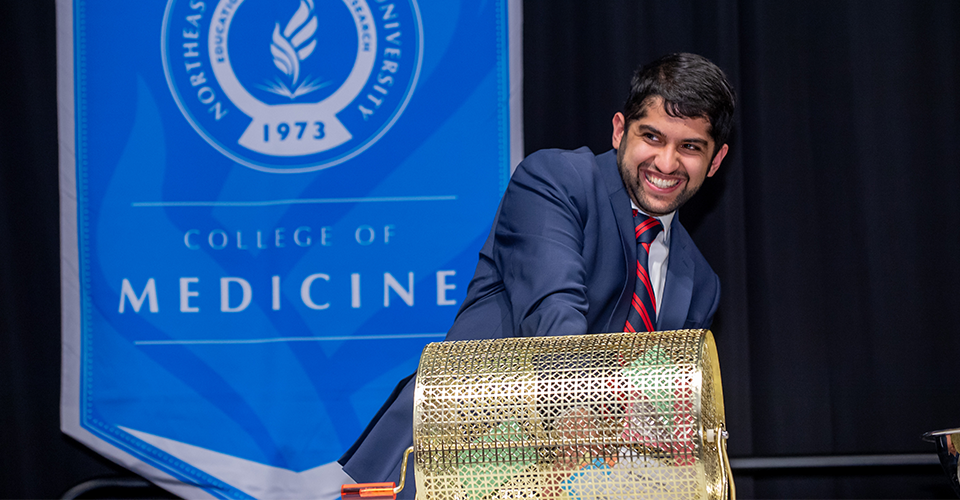 Match Day 2019 brought an avalanche of emotions and plenty of good news for 148 Class of 2019 College of Medicine students as they learned, along with students across the country, where they would be going for their residencies.

The fourth-years had waited (and waited!) for Friday, March 15, to arrive. Gathered at the Grand Ballroom of the NEW Center at 11:30 a.m., surrounded by family, friends and NEOMED faculty and staff, they waited for 30  minutes more as President Gershen; Dean Elisabeth Young; their co-class presidents Lillian Hetson (bound for a family medicine residency at The Ohio State University) and Albert Manudhane (photo above), headed for internal medicine at Rhode Island Hospital/Brown University), and others greeted them. Two honors were announced: Katherine Stiff (in photo) is the Class of 2019 Gonfalonian – ranked first in her class – and Carl Allamby (in photo with family) will be the class speaker at the College of Medicine Class of 2019 Graduation Picnic. Then finally, after alumni flipped giant number cards for a dramatic countdown (10-9-8…), the fourth-years were released on the stroke of 12 to exit the Grand Ballroom and pick up the envelopes holding their fates. They could open them privately, sharing the news as they liked. Then, if they wanted to (and many did), they could announce the results to the group waiting in the Ballroom.

This year, fourth-year student Nicholas Marshall dreamed up a “Game of Thrones” theme for Match Day, complete with themed t-shirts the students wore in the days leading up to the event. The theme from the premium cable network show provided default music for students who wanted it to accompany their walk to the stage. Other students chose their own soundtracks to mark the moment – say, “On Top of the World” or “Signed, Sealed, Delivered.”

As they announced their results, one by one, students thanked their parents, their families – and the friends who had become like family. Maryam Audu (headed to Summa Health for internal medicine) thanked the ‘’unsung heroes” in financial aid.

Kevin Dong thanked his mom for finding the NEOMED website way back when, starting him on the path to a surgical residency at the University of Illinois-Chicago.

When a beaming Carl Allamby made his way to the stage, he had his own small parade of family members with him – including his wife, who lit up the stage with her joy. Allamby is headed to Cleveland Clinic Akron General for Emergency Medicine.

Large posters on easels placed around the NEW Center atrium announced each "house"— each of the named residencies, such as internal medicine, surgery or pediatrics. The posters were a handy backdrop for students to gather for photos afterward.