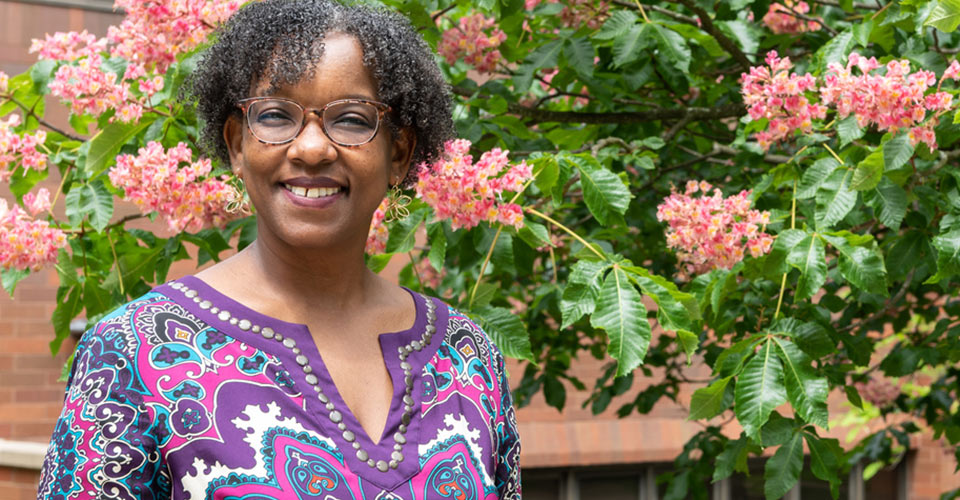 For Cheri Harris, business manager in the College of Pharmacy Department of Pharmaceutical Sciences, being one of the only people of color in groups was not new to her.

When she attended graduate school in Atlanta, she was one of the only Black students in her cohort. This pattern remained the same once Harris joined the workforce. She started her career at The University of Akron and worked there for over 16 years before making a transition to NEOMED in 2014.  “It wouldn’t be unusual for me to be in a meeting or a room where I was one of the only person of color,” Harris says.

Upon arriving at NEOMED, she wondered if things would be any different. Harris soon recognized that the NEOMED environment was supportive, and she could tell that the institution valued employee and student growth. However, it was hard to ignore the reality of seeing only a small proportion of faculty and staff members who looked like her.

Even though the work culture for Harris was positive, for the most part, she still wanted more connection with other NEOMED employees who were a part of the minority. Building these relationships alone was hard. Her department is in a secluded space, so she felt disconnected from faculty and staff who did not work in her area. There needed to be a group on campus designed for people like Harris to go to for support.

That all changed in the 2021 fall semester.

A group emerged with a purpose to support the Black and Latinx faculty and staff: the Black/Latinx Employee Resource Group (ERG).

When Harris found out that this group was being developed, she decided to join as a community member. She recalled going to the first meeting. “It seemed like a good opportunity to find some support as well as offer mine,” Harris says. “I realized that my face may be one of the few familiar faces that some may see, so I have always tried to make sure that others were aware I was on campus if they needed someone to talk to.”

After attending the group’s first meeting, she signed up and has been a member ever since.

The Black/Latinx ERG has been a safe space for Harris. There are opportunities to connect with employees who share life experiences similar to hers. The topics aren’t always about solving the world’s biggest problems, either. It’s often the little things that give you a sense of belonging. When one is well-represented in a group, they might take such subtleties for granted. That’s not the case for many Blacks and Latinx in certain environments. Absence can be as present for them as predominance is for others. Since the establishment of this group, however, Harris realizes that she is not alone.

Since Harris joined this group, her connection and experience on campus has been enhanced. “It is nice to have a community that can relate to one another,” she says.

Some of the connections she has made within the group have permitted her to meet with members outside of work to talk about any topic or problem that comes to mind. “I was recently able to get together with someone for coffee just to get to know them a little bit better,” Harris recalls. She and this employee had more chances to connect and interact since they both were a part of the Black/Latinx ERG.

One of the purposes of the Black/Latinx ERG is to enhance relationships among the Black and Latinx communities at NEOMED and promote a safe space of inclusion within the organization. Although this group was recently established, some employees such as Harris feel more connected to the campus since the ERG was made.

As this community grows, so too will their plans for the future. Crystal Dunivant, M.S.W., LSW, FIRST consultant and trainer in the BeST Center and co-president of the Black/Latinx ERG, hopes to move toward implementing more actions on campus that help address the underrepresentation of these groups, particularly among staff and faculty.