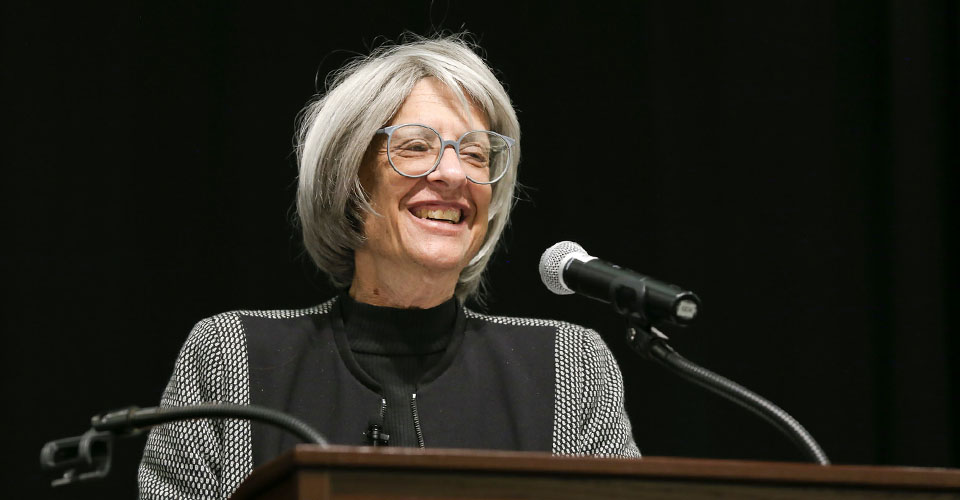 By the stage in life when Elyn R. Saks, J.D., Ph.D., was being celebrated by her colleagues for receiving a MacArthur Foundation Fellowship – better known as “the genius grant” – she had overcome a mountain of obstacles. So when she was presented with a t-shirt of Einstein and herself, along with the observation that only one of them had been certified as a genius, she quipped, “I’ve been certified many times, but never in that way!”

The audience at the NEOMED Education and Wellness (NEW) Center Grand Ballroom Tuesday, Sept. 25, for Dr. Saks’ appearance on the University’s inaugural Drs. Fred and Penny Frese Lecture series laughed appreciatively as Dr. Saks – the Orrin B. Evans professor of law, psychology and psychiatry and the behavioral sciences at the University of Southern California Gould Law School – told that story. Dr. Saks’s victory was all the sweeter to those in the audience who had just heard her talk about her life with schizophrenia, via passages from her best-selling book titled The Center Cannot Hold: My Journey through Madness.

Always an exceptionally high achiever – the top in her class at Vanderbilt University, a Marshall Scholar at Oxford University – Dr. Saks had struggled for years with mental health issues, but her problems came to a head during her initial year at Yale Law School. In describing a breakdown she had on the roof of the law school library, accompanied by two classmates who didn’t know what to make of her bizarre behavior, Saks painted a picture of the isolation she faced back then, when less was known about mental illness. Stigma continues today, she noted.

Dr. Saks withdrew from law school but returned to Yale to start over the following year. Numerous analysts and hospitalizations later, she came to terms with something that was difficult to concede, she told the listeners at NEOMED. She finally accepted that she needed medication to help her manage her disease. Finding the right one made all the difference, she said. “It was kind of a miracle drug for me.”

Dr. Saks used the 2009 MacArthur grant to open a think tank for law, mental health and ethics at the University of Southern California, where she is a professor. One message she has for those she encounters? It’s wrong to tell people with schizophrenia to reduce their expectations. (Initially, Dr. Saks was told it was unlikely she would even be able to live independently.) When one of her analysts explained that her brain was sick, and that exercising it by learning was one way that she could help it get better, it was affirming for Dr. Saks, whose love of learning has always been a driving force.

“I would like to thank our partner, Peg's Foundation, for its sponsorship of the work of the NEOMED Department of Psychiatry centers of excellence, including the Drs. Fred and Penny Frese Lecture series,” said Mark Munetz, M.D., The Margaret Clark Morgan Chair of Psychiatry, in his introductory remarks. Fred Frese, Ph.D., knew before his death earlier this year that Dr. Saks would be the first speaker. He and Dr. Saks had collaborated, with another colleague, on Recovery from Schizophrenia: With Views of Psychiatrists, Psychologists, and Others Diagnosed With This Disorder, which continues to be Schizophrenia Bulletin’s most-read article. Speaking admiringly about Dr. Frese, Dr. Saks called him “a kind, caring and resourceful person.”

Her words echoed the remarks of Dr. Munetz, who noted that “…everywhere [Dr. Frese] went, he changed people’s perceptions about people living with schizophrenia and other serious mental disorders by being a living example of the ways in which people affected by schizophrenia can lead meaningful, independent lives in the community.’’

Summing up, Dr. Saks noted that the humanity we all share is more important than the mental illness we may not. Following a standing ovation, many members of the audience took the opportunity to step up to a microphone and ask Dr. Saks questions. The public had been invited to the event, and some speakers mentioned their own diagnoses, or their work on behalf of people with mental illness.

Jody Bell, who works in the mental health field, including as a trainer for NEOMED’s Project Echo program, stood to commend Dr. Saks for the dignity with which she had persisted: “Even though your race turned into a marathon, you ran the race on your own terms.”