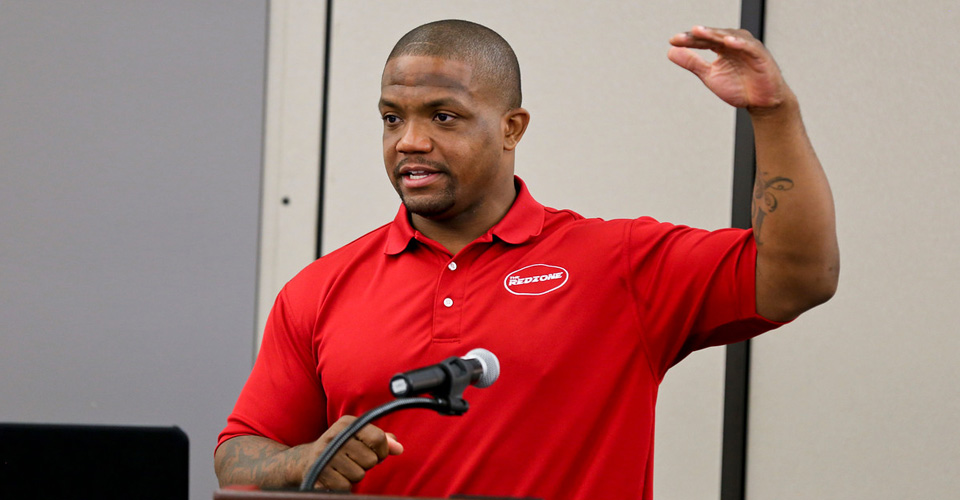 Former Ohio State University running back Maurice Clarett shared tales of his personal battles and accomplishments over the past two decades with students attending the MEDCAMP Health-a-Thon held July 14 at the NEW Center on the Rootstown campus. Clarett was there to fire up the students as they prepared to develop programs to address current community health issues, such as drug abuse.

The football star said his life had begun spinning out of control following the 2002 BCS National Championship. He decided to turn things around, and took it upon himself to acquire skills and knowledge while incarcerated after a 2006 arrest for carrying several concealed weapons and trying to flee the police.  The former standout running back now works with The Red Zone, an organization that helps people throughout Ohio overcome adversities, such as drug and alcohol dependence.

Now on the other side of addiction, Clarett encourages others—such as the budding health professionals attending the MEDCAMP Health-a-Thon, for recent high school graduates and current undergraduates who have yet to complete their bachelor degrees—to lend a hand to those who are struggling.  Whether it’s someone’s grown son fighting a heroin addiction or a child skeptical of forming a bond of trust with their teachers or social workers, they can use help, he said. “Remember, as future medical professionals, you are there to do more than bill insurances; you are there to care for your patients,” said Clarett.

Clarett’s other top recommendations for those in various health professions?