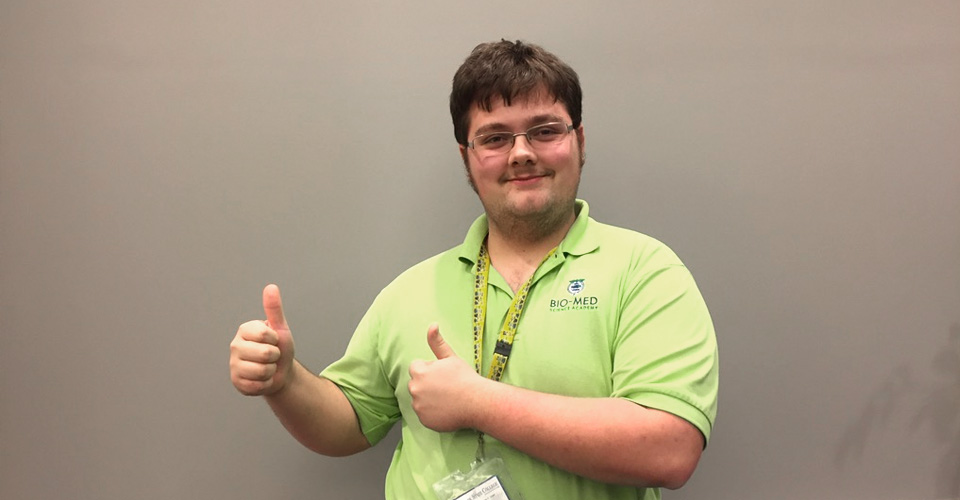 From NEOMED to the Nationals: Bio-Med Senior Advances to National Brain Bee Competition

To anyone who has ever watched the “Big Bang Theory,” the character Amy Farrah Fowler portrayed by Mayim Bialik may seem like your typical neurobiologist. For Christopher Jones, a senior at Bio-Med Science Academy, she is much more than that; she was how he first discovered his interest in neuroscience. Intrigued by what she said, he began researching the concepts and topics on the show for fun. It was then that he knew he was hooked on both the show and neuroscience.

Ever since his sophomore year, Jones has participated in the Brain Bee, an international competition in neuroscience with competitions held in more than 40 countries. Now, as a senior who has interned in NEOMED research labs, he has accomplished his goal of being the first Bio- Med Science Academy student to win the NEOMED regional competition and advance to the National Brain Bee Competition.

Along with the “Big Bang Theory,” NEOMED has played a large role in furthering his interest in neuroscience.

“NEOMED has helped harness my interest in neuroscience by providing opportunities such as being able to work with brain and spinal cord specimens in the labs on campus and being able to speak with professionals in the field,” says Jones. “I am also interning here at the NEOMED campus under the supervision of Dr. Alexander V. Galazyuk. I work in a lab studying gap detection deficits in mice with and without tinnitus—the perception of noise ringing in the ears. With the help of both Dr. Galazyuk and his post-doctoral fellow RyanLongenecker, I’ve been able to advance my knowledge of auditory system anatomy and physiology.”

The knowledge Jones has gained through his internship, combined with his passion for neuroscience, gave him an edge at this year’s competition. It will take more than passion to win at the national competition, though. Jones says he’ll be reading any neuroscience text he can get his hands on, and he plans to participate in specialized tutoring sessions offered by Dana Peterson, Ph.D., an associate professor of anatomy and neurobiology at NEOMED. He looks forward to competing at the National Brain Bee Competition in Baltimore, Maryland in March.

-- Gabrielle Biltz is a senior at Bio-Med Science Academy and an intern in the NEOMED Office of Public Relations and Marketing.