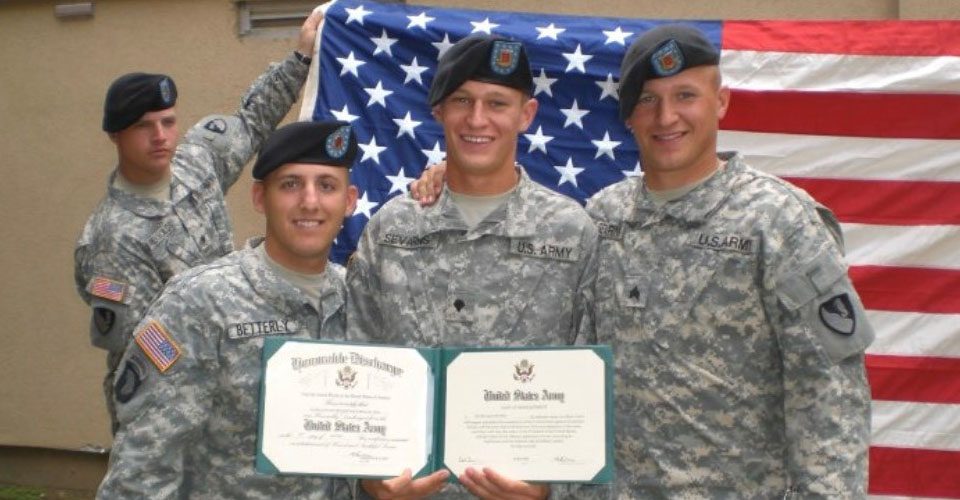 From the Military to the Pharmacy

NEOMED holds an annual ceremony to honor veterans like Daniel Sevarns, profiled here, on the occasion of Veteran’s Day. NEOMED’s Future Military Physicians gathered to raise and lower the American flag on Monday, Nov. 6, outside the visitor entrance to the NEW Center.


When second-year College of Pharmacy student Daniel Sevarns (pictured in center) turned 18, becoming a pharmacist hadn’t yet crossed his mind. Instead, he enlisted in the Army, following in the footsteps of his older brother, Mike (pictured at right)— even selecting the same Military Occupational Specialty (MOS) as a bridge crewmember.

Though it’s a rare occurrence, Sevarns and his older brother ended up in the same platoon, and they deployed to Iraq together for nine months in 2011. “Big Sevy” and “Little Sevy” went on every mission together—though for safety’s sake, the two always traveled in separate vehicles. While stationed at Camp Taji, in the center of Iraq, the pair helped to maintain the local bridges. “That was at the time when they were closing down Iraq. We had to make sure the bridges didn’t get blown up, so people on the north side could travel down from Iraq to Kuwait,” Sevarns explains.

Transitioning from his upbringing in the rural Upper Peninsula of Michigan to Iraq was a huge culture shock for Sevarns. While his own family didn’t have a lot of money, the level of poverty he encountered in Iraq made a lasting impression.

Searching for the right career

After nearly five years of service, the younger Sevarns decided it was time to hang up his boots and retire from the Army. Sevarns first set himself a goal of becoming an x-ray technician, but his girlfriend (now wife) at Ferris State University in Big Rapids, Michigan encouraged him to pursue a more advanced degree: radiology.

When Sevarns found that jumping back into a civilian educational setting was a little more challenging than he had expected, he considered other options. After "a lot of soul searching" he discovered a pharmacy program at his undergraduate school that looked appealing, but Sevarns’ now-wife (an Ohio native) encouraged him to also apply to NEOMED’s College of Pharmacy.

“I immediately liked the atmosphere, the updated technology in the lecture halls and the people at NEOMED,” says Sevarns.

Two years later, Sevarns has immersed himself in the University as a member of Kappa Psi Pharmaceutical Fraternity, Inc., the Student Society of Health-System Pharmacists (SSHP) and the Student College of Clinical Pharmacy (SCCP). Also the vice president of Students for a National Health Program (SNaHP), and a busy volunteer for campus organizations, he admits he is still working towards finding the perfect school-life balance. Most recently, he helped at an immunization clinic in downtown Cleveland, where he was glad to meet a veteran who had served in World War II.

“My best piece of advice for student veterans is to get an internship at the Louis Stokes Cleveland VA Medical Center, because that has been a tremendous experience for me. They do amazing work by giving you an all-around experience and access to shadow any profession,” he says. His military ties make him feel right at home as an intern in a setting where his fellow veterans receive care.