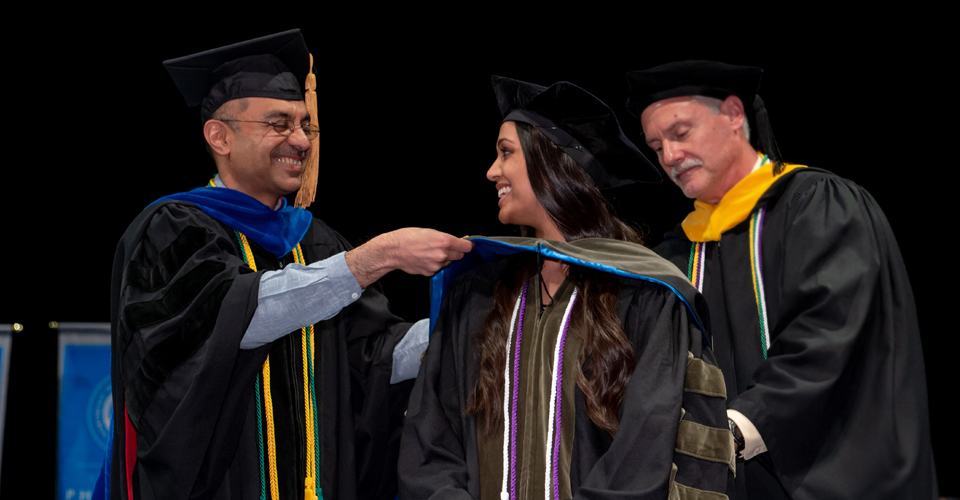 Get to Know Altaf Darvesh, Ph.D.

Some days we could all use someone cheering us on with a “You can do it!’’ to get through the week. Altaf Darvesh, Ph.D., an associate professor of pharmaceutical sciences and psychiatry, has made it his mission to deliver those extra doses of encouragement to NEOMED students as they work toward becoming the next generation of physicians and pharmacists.

Tell us about where you’re from.

I come from India, which is far away on the other side of the planet. Have you heard of Mumbai? Mumbai is India’s New York. It has a stock exchange, and it has Bollywood and beaches too! I tell Americans, Mumbai is like a combination of four American cities – geographically it is centered on the west coast, similar to San Francisco; culturally, it’s a cross between New York and Los Angeles; and weather-wise, it is very hot and humid like Miami.


Tell us a little bit about yourself.

I’m an only child and I come from a conservative, traditional Shia Muslim family. Both my parents are deceased, I have no siblings, no spouse or kids, but I do have wonderful cousins and good nieces and nephews (my cousins’ children) who make me spend a lot of money on them!

Growing up, I was the shy little nerdy kid with glasses. I was the valedictorian in high school and always enjoyed English literature. I enjoyed teaching Shakespeare to ninth grade students on Teacher’s Day (an occasion when Indian educators are honored with a day off) so much that I considered becoming an English teacher.


What came before your Ph.D.?

Before starting my Ph.D., I got a phone call from Pfizer asking if I would like to work for them in clinical research. I told them I didn’t know anything about clinical research and they told me, soon I would because they train their people well. It was one of those life-changing moments. They offered me two positions. One was monitoring a schizophrenia clinical trial and the other was monitoring a malaria clinical trial.

I went home and spoke to my dad. My father was a very strict man and a very practical guy. I showed him all the folders and information and he said I should go for the schizophrenia trial. I said, “Why?” He told me to look at the sites. Delhi, Kolkata, Bangalore and Chennai — they’re all cities where I would fly into that offered good infrastructure and hotels to visit the psychiatric hospitals. Then he said, “Look at the sites for the malaria trials — they’re all in Eastern India. You would have to take the train, and they’re all in interior areas so you would have to take a bus, too; and just think…malaria patients are all in swampy, malaria-prone areas. You might get malaria, too!”

My father also said, “The last I heard, mental illness is not infectious.”

I decided to work with the schizophrenia clinical trial group and that was one of my life’s turning points because I became very interested in psychiatry and neuropsychopharmacology.

I completed my Ph.D. in neuropharmacology at the University of Cincinnati and a post-doctoral fellowship in psychopharmacology at the Veterans Affairs Medical Center in Portland, Oregon. It wasn’t until my post-doc advisor encouraged me to apply to a new pharmacy school on the outskirts of Portland that I started to think about applying for other jobs.

I turned in about 40 applications and got an interview from NEOMED. I was offered the job in 2007 and started as an assistant professor.

I was a Professional Development Advising Team (PDAT) advisor at the time and my co-advisor asked me if I would be willing to teach some psychopharmacology to medicine students. She gave me a date in March and I started preparing over Christmas break. I was terrified. It took me until about mid-February to do a four-hour lecture from scratch. That was the first time I taught on campus and the students clapped. My co-advisor told me, “They clap for no one!”


What is your number one priority as an educator?

For me, it’s very important that students be taught well and mentored well. I think failing to boost a student’s morale or hurting a student’s morale is an absolute sin. I should not be in my job if I’m not encouraging my students.


What do you enjoy most about being an educator?

If there’s anything I love more than pharmacology, it’s teaching pharmacology! I think every student is equally important. Whether it is a valedictorian or someone who struggles in class, every student needs attention.

Students are always welcome to come talk to me. Whether they’re having financial issues, housing, roommate issues, or want to discuss career plans – I just listen to everything they say.

If you didn’t already know Dr. Darvesh, and you think he sounds too nice to be true, there was a hint of how special he really is at our 2018 Commencement: Dr. Darvesh was selected by graduating class members to be one of the exceptional faculty members who would present the students with their doctoral hoods. While a small number of faculty are given this honor by graduating doctoral students in our colleges each year, Dr. Darvesh was not honored once, but twice this year as he was asked by graduates in both the College of Pharmacy and the College of Medicine - a privilege that’s never been given before.