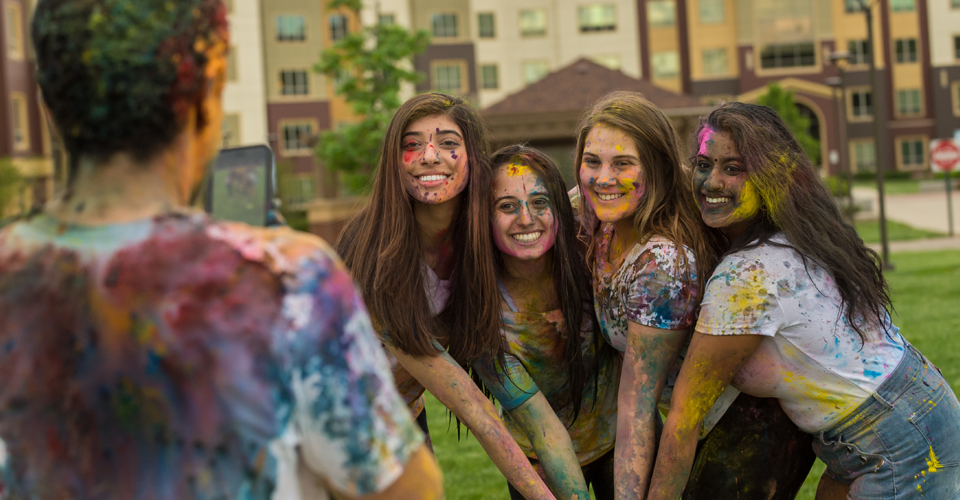 Get to Know American Association of Physicians of Indian Origin

From Bollywood dance workshops to Diwali and Holi celebrations, NEOMED’s chapter of the American Association of Physicians of Indian Origin (AAPI) is on a mission to introduce students to Indian culture. Co-presidents Harshitha Dudipala and Koshala Selvakumar share their thoughts on the student organization.

Tell us about AAPI.

HD: We’re very much grounded in Indian culture, but AAPI’s membership is open to any race, religion or ethnicity. We throw festivals for Indian celebrations, such as Garba, Diwali and Holi, throughout the year.

Will you explain what those three festivals are?

KS: Garba comes from Gujarat, a state in Northern India. It is performed during the holiday of Navaratri and is a nine-day festival of prayer. We just celebrated it in October. The Garba dance is comparable to a circular line dance. Everyone forms a bunch of concentric circles and follows the leader.

HD: There’s a second part of Garba called Raas. It involves Dandiya, sticks that you hit together. Raas is similar to a line dance, too. There are two lines of dancers who follow movements with the sticks and you work with the partner across from you.

KS: In November, we celebrate Diwali, the festival of lights. It is based in the Hindu religion, but it is commercialized in the same way Christmas is. When we celebrate, the focus isn’t solely on religion. We acknowledge it to address the roots of the holiday, but Diwali itself is celebrated everywhere, not just by Hindus and people in India.

This year, half of the proceeds from AAPI’s Diwali celebration will be donated to the International Medical Health Organization!

HD: We have one more major event in the spring, called Holi – the festival of colors. It’s when we throw a bunch of colorful powders and water balloons at each other in the courtyard.

KS: Holi is an event that calls for warmer weather, so we usually celebrate it a little late. Holi is traditionally celebrated in March. In India that’s fine, but due to Ohio’s long winters, we usually have to postpone it a month or two.

Why do you encourage students to join AAPI?

KS: It’s important to experience other cultures. A lot of events on campus are specifically pharmacy- or medicine-based, but AAPI is nice because it’s not based on your academic interest. And you don’t have to participate – you can just be there to take it all in.

HD: I think AAPI is very inclusive and welcoming. We open the door for the rest of the University to learn about our culture. For example, Diwali is a great opportunity to get exposure to henna, types of Indian music (like Bollywood music), Indian food, dancing and singing.