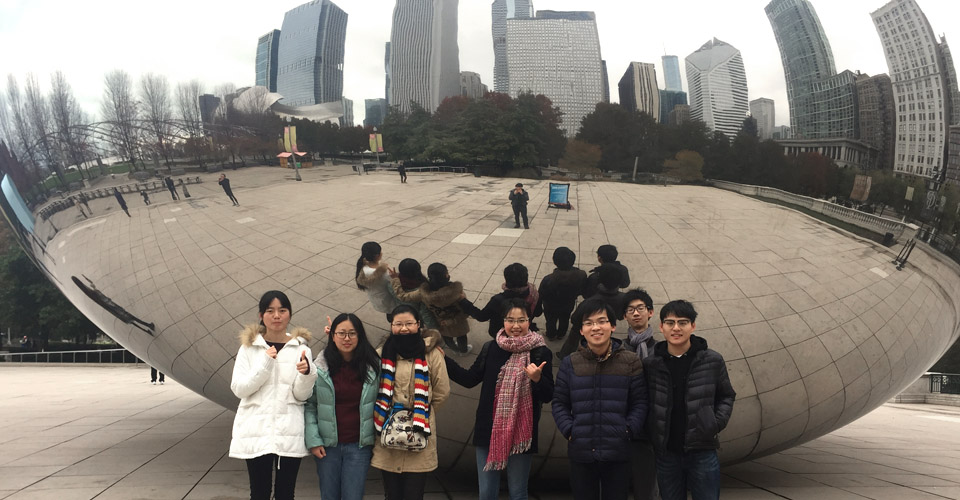 Get to Know: Anhui Medical Students

Pictured above: Anhui University students pose in front of Cloud Gate, a sculpture by Anish Kapoor better known as "The Bean,'' at Millennium Park in Chicago. Pictured from left to right: Molly, Grace, Wang, Sophie, Chris, Clark (behind) and Alan.

How did you spend Thanksgiving?

Seven Chinese students at NEOMED visited Chicago for a weekend of sightseeing and shopping. They’re eager to get to know their surroundings near and far while they take part in an educational exchange between Anhui Medical University in Hefei, China and NEOMED’s College of Pharmacy. The students are following the class schedule of first-year pharmacy students and will return to China with a certificate of attendance in spring 2017.

In an email with a photo showing the students looking down from the lofty perch of the Willis (formerly Sears) Tower observation deck, one student wrote a familiar tourist sentiment: "Really scared! We just pretended to be calm.’’ On campus, the students are known by their American names: Clark, Alan, Chris, Molly, Grace, Wang and Sophie. Each picked a name with special meaning behind it. Clark chose his name from Superman’s alias, Clark Kent. Alan named himself after his favorite basketball player, Allen Iverson, spelling his name differently. Chris chose his name from the television show “The Walking Dead.” Molly chose her best friend’s name, and Wang chose her Chinese last name because of its easy pronunciation. Grace’s name comes from a character in a Chinese television show called “Where Will We Go, Dad?” and Sophie was given her name by her English teacher in China.

The students have already started immersing themselves in American culture, with trips to Cedar Point, a Cavs game and the Cleveland Museum of Art. They’ve even taken in a Northeast Ohio specialty—a 4-H club meeting complete with campfire and s’mores. It was organized by Jodie Dillner of the College of Pharmacy, the students’ indispensable coordinator at NEOMED as well as a 4-H parent.