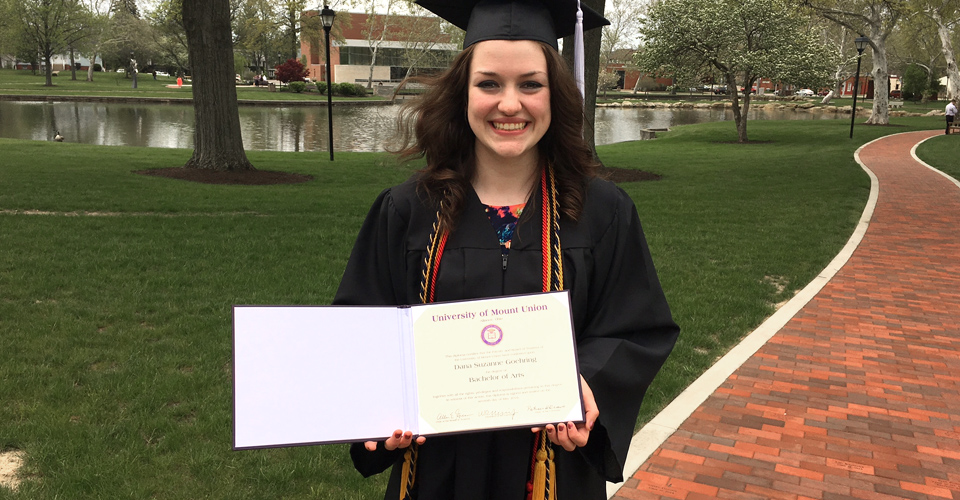 Get to Know Dana Goehring

Dana Goehring is the newest addition to NEOMED’s Office of Public Relations and Marketing team. She began at NEOMED as an intern in the fall of 2015 and is now a full-time public relations and marketing assistant. Her primary role is a writer for both print and digital publications.

A native of Northeast Ohio and a 2016 graduate of the University of Mount Union, Dana holds a bachelor’s degree in public relations and writing, with minor in chemistry.

You started out as a chemistry major. How did you find your way into marketing and public relations?

It all started out with organic chemistry. No matter how hard I studied or how often I went into the professor’s office for help, I never understood it. I had always heard that organic chem was one of those things that you either get or you don’t. I didn’t! That was when my advisor said, look, your lab reports are very well-written. Why don’t you make chemistry your minor and do science writing?

It’s exciting to interview the researchers here because I love learning new things and my chemistry background helps. Sometimes they’ll talk about an organic compound and I’ll say, “I made that in the lab!’’

You’re a self-proclaimed geek/nerd. What makes you say that?

What is your favorite piece you've written so far?

It’s a series of pieces on suicide prevention, directed at students. That sounds a little odd to be a favorite piece, but it’s such an important topic and I was honored to be trusted with it. The subject hit home because I just graduated myself and realized that this is an issue on campuses everywhere.

What’s with the owls all over? They’re on your wall, your coffee mug, your lunch tote…

I really love owls! They are such beautiful creatures. I think my fascination started in college. My love for owls was so well-known on campus that if some of my professors found owl items, they would give them to me.