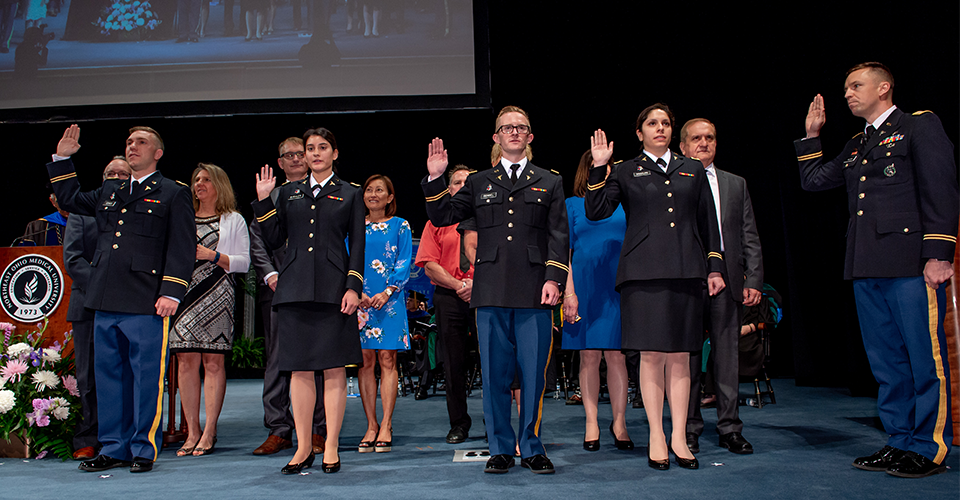 Get to Know Future Military Physicians

Tell us about Future Military Physicians.

CH: Future Military Physicians is a national organization that was established to help students who are pursuing a career in military-based medicine. There are chapters across the country at various medical universities, and ours is one of the most active. Future Military Physicians is there to help each other through the process of applying for residencies, because it’s different for those of us enlisted in the Armed Forces. We do our residencies through a military hospital for the branch corresponding with our scholarships.

SM: At NEOMED, we have students representing the Air Force, Army, Navy and National Guard, so they do their residencies at hospitals with those affiliations.

SK: Non-military medical students have a lot of guidance from professors, advisers and peers, but within the military program, other than us, there’s not really anybody on campus to guide us along the way. All of our branches’ headquarters are far enough away that the only type of contact we have is through email. A lot of times we’re asking third- and fourth-year College of Medicine students for military and medical advice.

As a group, we do a lot of mentoring. We bring in NEOMED alumni who have graduated through the F. Edward Hébert Armed Forces Health Professions Scholarship Program (HPSP).

What is required if you’re a Health Professions Scholarship Program participant?

CH: For the Army, essentially, you sign for a mandatory four-year service commitment. For that, they will pay for your full tuition, plus a living stipend every month. During medical school, you’re required to do training sessions, like Basic Officer Leadership Course (BOLC). For the Army, we also have a new 4-week training course called the Direct Commissioning Course (DCC), which must be completed before BOLC. At the end of your fourth year of medical school, you go on to complete your military rotations, then residency. After the four-year service commitment, we can either sign on for another four years, or four years of inactive duty, for a total of eight years’ commitment. Half of the commitment is served active duty and the other four can be served in a different manner (like reserves or inactive).

What’s different about the medical school experience when you’re in HPSP?

SK: The really cool thing about our program is, as soon as you’re awarded the HPSP scholarship, you do your commissioning. So while you’re in medical school, you’re an officer.

SM: We’re second lieutenants right now (the lowest officer rank) and when we graduate from medical school, we will become captains. The curriculum for Shane and me has shifted a little bit because we joined the program during our first year of medical school. Because we joined late, we will have officer training next summer. NEOMED has been really helpful moving around our third-year rotations to help get us into officer training before we do our away rotations at military hospitals.

SK: For example, we do our third-year normal rotations, then in our fourth year we do elective rotations. That’s when we have the option to go to military hospitals to do what they call an “audition” rotation. NEOMED refers to it as our military elective rotation.

What would you recommend to students interested in HPSP?

SM: I think the biggest thing about the scholarship program is to do your research beforehand. Talk to people in the program and read stuff online. I read a lot of forums online and talked to a lot of the current third-year College of Medicine students above me. I talked to a lot of people about the pros and cons. I did my due diligence before I decided HPSP is what I wanted to do.

SK: It’s a big commitment – don’t jump into it uneducated.