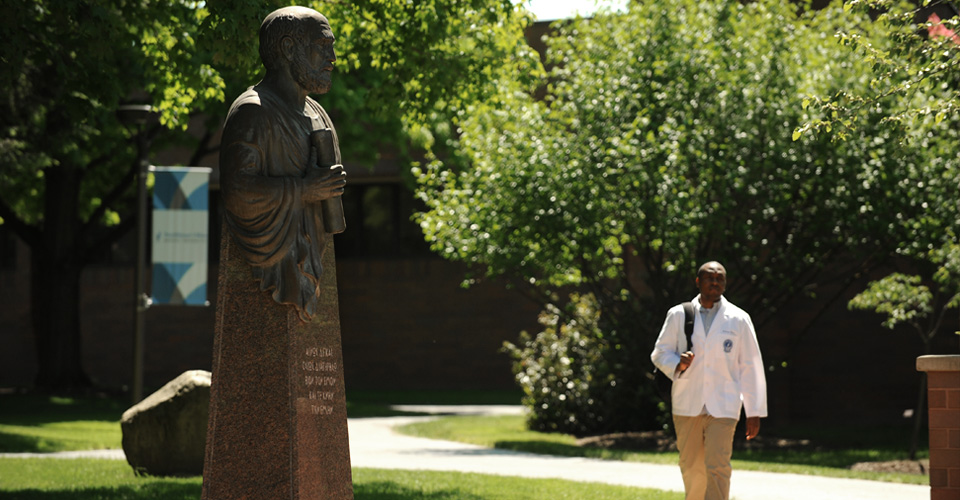 Get to Know Hippocrates

Known for: The Hippocratic Oath

Hippocrates? Who is this Greek fellow? You know, the statue watching over the outdoor amphitheater in NEOMED’s courtyard? The statue that stares into the distance with lifelike eyes, deep in thought? That’s the one. How did he come to be here?

On May 24, 1996, an outdoor amphitheater and statue was dedicated in honor of Hippocrates by Harry Meshel, a retired legislator from Youngstown who worked tirelessly to raise contributions for its construction. Anna Christofordis, also known as the mother of the 1996 graduate Jim Christofordis, M.D., created the statue. Eighty members of Greek ancestry attended the dedication.

Have you ever taken time to read the oath? At the base of the statue, the oath is inscribed in Greek and English. It begins...

I swear by Apollo the Physician, and by Asclepius and Hygeia and Panacea and all the gods and goddesses, making them my witnesses, that I will fulfill, according to my ability and judgement this oath and this covenant:

To hold him who has taught me this art as equal to my parents and to live my life in partnership with him...

Although the wording has been changed, versions of the oath are still used today. According to legend, Hippocrates used to spend hours teaching medicine to students under a sycamore tree. That same year, NEOMED received an authentic seed from the original tree in Kos, Greece to plant in his honor rightly named the “Hippocratic Oath Sycamore.”

Next time you are walking through the courtyard, check Hippocrates out!