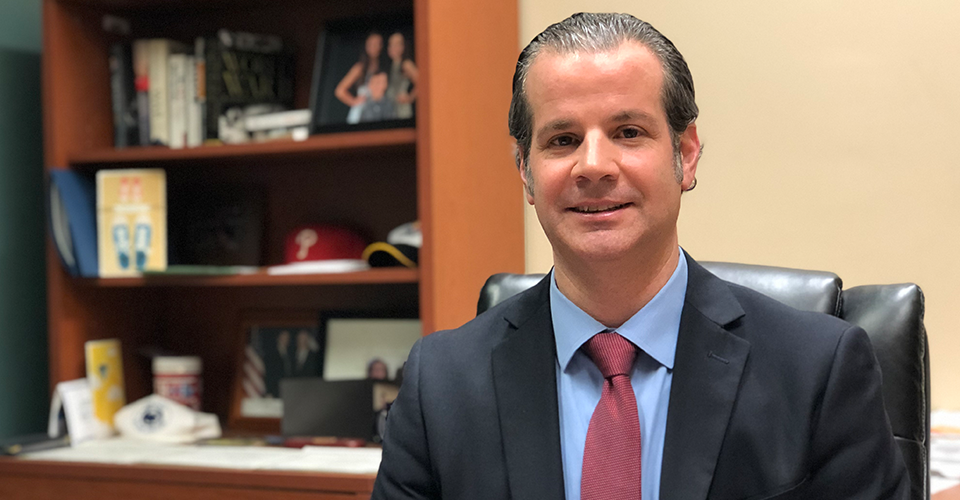 Get to Know John Stilliana

An avid fan of the Pittsburgh Pirates, John Stilliana is in his element rooting for a team he believes in. He remembers a conversation with an Ohio legislator who asked him what percentage of NEOMED’s budget came from the state. When Stilliana answered, the legislator pushed back. “Isn’t that a little high?” he asked.

“NEOMED graduates 90-plus percent of our students as physicians and pharmacists—and there’s a need for all of them. That’s a great return on investment,’’ Stilliana responded, noting with a grin that the legislator agreed.

“I love working here. I believe in the mission and we’ve got great students—articulate and well versed. And while in higher ed in general there is concern about degree programs—what students are being prepared for—there will always be demand for our students,’’ he added.

One of the first big items on Stilliana’s agenda will be advocating for NEOMED in the state’s biennium budget—a process that will begin in earnest in January. This will be Stilliana’s fourth time through the process of deciding the two-year budget, and it shows. He rattles off the timetable for when it will make its way to the Ohio House, then to its Senate, then to conference, before finally being settled by June 30, 2019.

Last time around the process, NEOMED took a five percent budget cut, due to state budget shortfalls. Stilliana will advocate for an overall increase this time, and he hopes to bring back the Campus Safety Mental Health program funding – an area in which NEOMED provides statewide leadership.

Stilliana treasures the trusting relationship he had with Lewis, whom he especially appreciated for an ability to offer guidance without micromanaging. “We’ve had such good rapport. I’d send him an email saying, ‘Here’s what I’m going to be doing this week,’’’ and he would write back, ‘Good, and you might want to think about this, too,’’’ Stilliana says.

Some of Stilliana’s lobbyist colleagues like to do business from their home offices. He’d rather be closer to the action, on-site in Columbus. “You might be across the street from the Statehouse getting coffee and run into someone and have a better conversation than if you had scheduled a formal meeting,’’ he says.

Earlier in his career, Stilliana worked in Governor George Voinovich’s office and the Cuyahoga County Board of Elections, so he knows what it’s like to be on the receiving end of messages from lobbyists.  Likewise, he knows it’s important to treat junior staffers with the same respect as their senior colleagues. As Rich Lewis taught him, not only is it the right thing to do; it’s also prudent: They may be senior staff one day.

“It’s great for the students to be able to practice advocating for an issue with someone on campus who has a depth of experience in government,’’ says Dugan. She calls Stilliana a tremendous resource at NEOMED –someone who is skilled at giving students constructive feedback to help them develop strategies to effectively interact with elected officials and their staff.

Stilliana’s coaching helps prepare students for special events like Pharmacy Legislative Day – when  representatives of schools of pharmacy state-wide visit Columbus lawmakers – and for Lobby Day of the Inter-University Council (IUC) of Ohio – when an average of four NEOMED students visit this consortium comprising all 14 public Ohio universities, currently chaired by President Gershen.

“We have some really active, engaged students who travel not only to Columbus but also to Washington, D.C., to meet with their representatives. I believe that they feel comfortable doing so because of John’s sharing his experience as a staff member. It seems to really resonate with the students that it is important and they can make a difference,’’ says Dugan.

The appeal of advocacy

Growing up in the Youngstown suburb of Boardman, the young John had a passion for news of the world, past or present. A seventh-grade teacher who required students to present a current event to their classmates each day got no argument from Stilliana: He loved the assignment. He pursued his interests in military history, political science, and international relations in college, earning a B.A. in history and political science at Youngstown State University and an M.A. in history from Cleveland State University.

Today, Stilliana is a husband to Carla and father to three (two daughters in high school, a son in middle school) who commutes multiple days a week to Columbus from their home in rural Chardon, Ohio. On his travels to the Washington, D.C., area, he will take up Lewis’s torch – in person – to advocate for research funding at NEOMED.

He looks forward to new experiences. “It’s important that you’re always open-minded. I can always learn things from colleagues and people in the IUC,’’ says Stilliana. But one thing he already knows for sure: NEOMED is an institution whose cause he’s glad to champion.