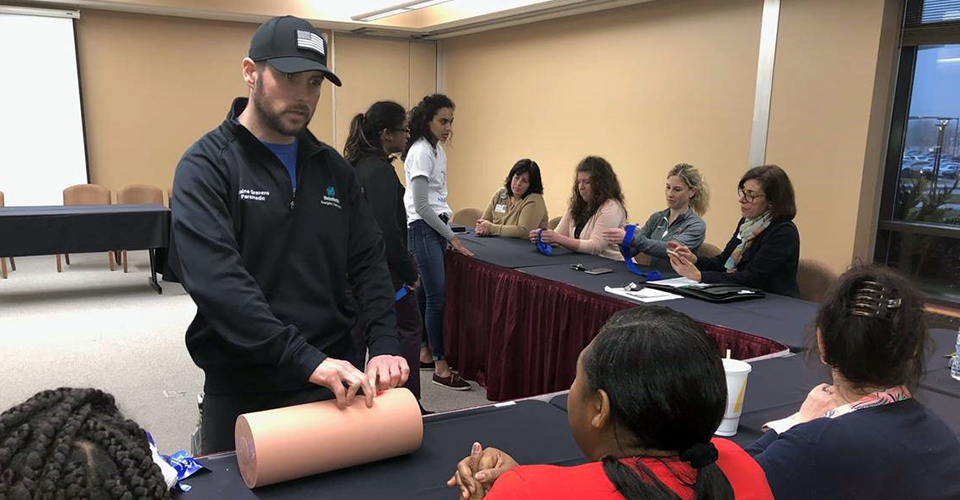 Get to Know NEOMED’s Stop the Bleed Trainers

Ever since, the students have been advocating for training across campus. Lydia Du shares more about the group.

What is Stop the Bleed?

LD: It’s a national effort developed by the American College of Surgeons and the United States military as a way to address the national incidents involving mass casualties. Many of the deaths related to these incidents, as in the Las Vegas shooting and the Boston Marathon bombing, resulted from bleeding. Some of those deaths might have been prevented if more people were trained to stop bleeding.

What brought Stop the Bleed to NEOMED?

LD: We joined with the Stop the Bleed Committee at Mercy Health St. Elizabeth Youngstown Hospital as a way to bring these coordinated efforts to Northeast Ohio. In the beginning, it was a subset of NEOMED’s Association of Women Surgeons, but we saw the importance of having this training and became our own organization.

Why is it important for students to receive training like this?

LD: I think it's important for all people to have this training and knowledge, because anybody can encounter an emergency that could involve a bleeding emergency. It's uniquely important for our medicine and pharmacy students to have this information. They are more likely to be faced with these situations, being that they're in the medical field. Physicians and pharmacists are leaders in the community, so they should be the ones leading these causes.

What do Stop the Bleed student trainers do?

LD: We came up with an adapted version of the Stop the Bleed program where students are more involved. Medical students are not usually as involved because they can't be trainers independently. We have a full instructor, someone like a nurse or doctor, come to administer the training, but the students teach more of the hands-on portion of the class. It’s different from how most people do it, but it does increase our numbers for trainers and ability to reach people.

Over the past year, we’ve had the opportunity to train several groups on campus, such as Women in NEOMED. We also have collaborated with the NEOMED Police Department to partner Stop the Bleed training with the University’s ALICE Training sessions.