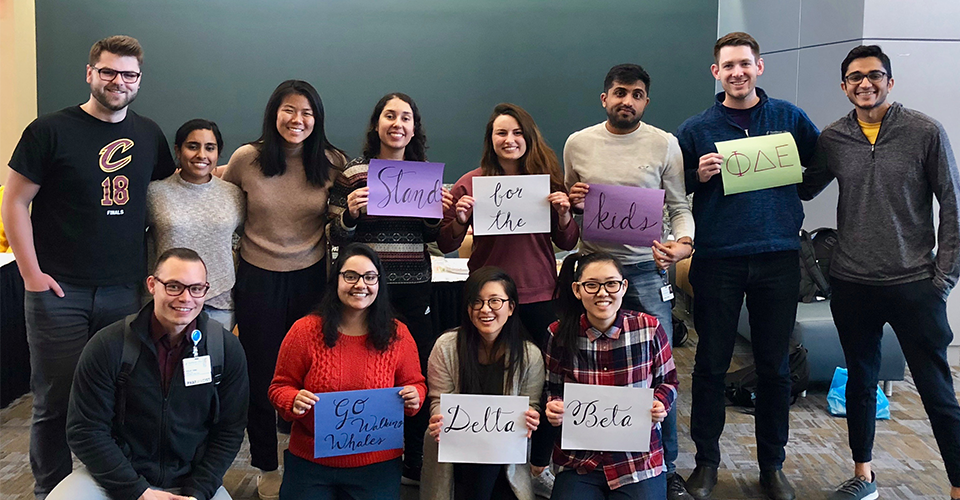 Get to Know Phi Delta Epsilon

Phi Delta Epsilon (PhiDE) is one of the largest medical fraternities in existence. The NEOMED chapter started in 2016 and now has about 30 members. We sat down with David Johnson, the chapter president, and Akhinav Raval, the vice president of recruitment, to learn more.

How did you get started in this fraternity?

DJ: I joined PhiDE in 2011 when I was an undergrad at Ohio State. I was a member of their first pre-med chapter, and it’s nice that now I’m part of a med school chapter.

AR: I was a part of PhiDE all four years as an undergrad at the University of Akron, starting in 2011. It was a really rewarding experience that helped me to grow, and it opened a lot of opportunities.

What are some of the NEOMED chapter’s activities?

DJ: There are a few hallmark events we participate in every year. One of those is Stand for the Kids, which we had this fall. All the chapters nationally have a fundraising day that day for a philanthropy partner, which in our case is Akron Children’s Hospital.  We did a '90s-themed bake sale. We had '90s music going and put on some '90s attire. We also sold Nate the Walking Whale lapel pins to build school spirit.

Another thing we always do as a chapter is volunteer during Radiothon, Akron Children’s Hospital’s annual fundraiser. We make Valentine’s Day cards, we direct people, and just help them run the show.

AR: At meetings for another interest group you might only see M1s turn up, but I would say with our chapter, you see all the members – be they M1s or M4s— turn out. It’s a network where our members get to know who their fellow NEOMED students are. Having access to that network makes communication better for our members.

What other activities does your chapter do?

DJ: We offer a lot of networking events. We’ll often work with local undergrad pre-med chapters at KSU and UA.

We also work with a resident physician who was a PhiDE member, and she's now the chief resident for Emergency Medicine at Genesys Regional Medical Center in Grand Blanc, Michigan. She’s really involved with our chapter; she even gives out her phone number in case students want help writing their personal statements for applications.

If you were talking to current or incoming students, why would you encourage them to join?

AR: There are a lot of connections you can make because PhiDE is so well established.  For example, if someone is interviewing in front of a panel for a residency, often one of the panelists will be a PhiDE member too.

DJ: PhiDE is the only association that has a presence during all aspects of medical training. As a pre-med, med student, resident, and practicing physician, you have a network that you can learn from. Really, there’s nothing else that can be such a constant in your training. I’ve met people at Ohio State that are now practicing physicians, and they say they want to come to NEOMED to meet our chapter. Having this system backing you all the way through school is very nice.

Liam Martin, a senior at Bio-Med Science Academy and an intern in the Office of Public Relations and Marketing, contributed to this article.