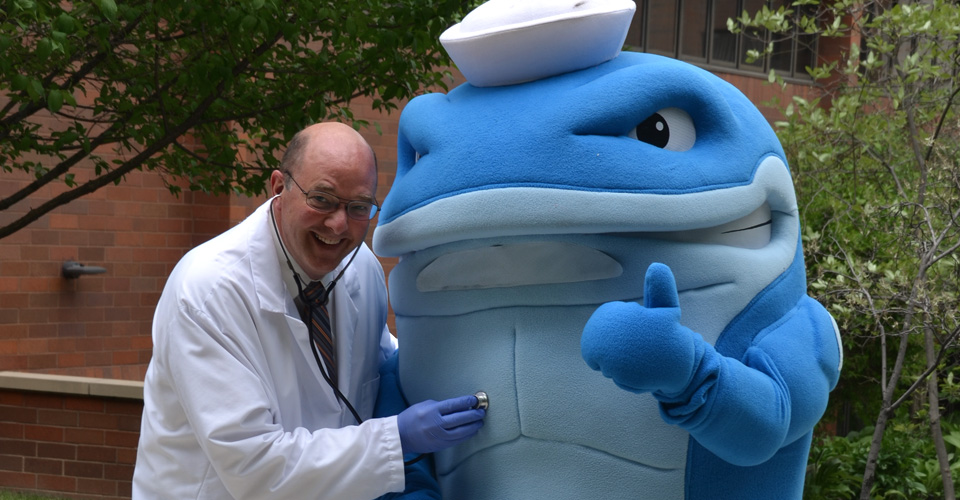 Get to Know Stan Dannemiller

He’s the man who calls science “sexy” and is curious why anyone would want to interview him because he thinks he doesn’t do cool stuff: Stan Dannemiller, D.V.M., director of comparative medicine at NEOMED.

Chatting over coffee, Dr. Dannemiller says his background with animals started in high school, when he worked for a veterinarian. His first love was actually fish and aquatics (hence, the fish tank full of zebra fish sitting next to his desk), but being from Ohio and having an interest in marine biology didn’t quite work out for him. Instead, he went on to attend The Ohio State University to earn his doctorate in veterinary medicine with an interest in research.  He later went on to earn a master’s in zoology/comparative physiology.

After college, Dr. Dannemiller went into private practice as a veterinarian, but found minimal intellectual stimulation. “Working with the animals was fun and the people were a delight, but I wanted more,” says Dr. Dannemiller. Leaving his work in private practice, he moved to Columbus and worked for Battelle, spending a number of years working in the animal science lab. This inspired him to earn a second master’s degree in toxicology and comparative medicine.

What is comparative medicine, one might ask? It is the use of animals to look at human problems and search for a cure for human diseases. To gain more training as a lab animal vet, Dr. Dannemiller was a fellow at Penn State University.

“I became somewhat of a ‘lab animal nomad,’ moving from various companies such as Proctor & Gamble, Baxter and GlaxoSmithKline, where I did work as a post-doc,” says Dr. Dannemiller. “My mentor made sure we had great connections and because of this, I have worked with some of the best in the field.”

His travels eventually took him to NEOMED, where he succeeded Walter Horne, D.V.M., M.B.A. Today, he’s just an animal guy who cares for animals for work, Dr. Dannemiller says.

“I like playing in everyone else’s sand box,” said Dr. Dannemiller. “It is phenomenal to work with scientists and the top people in their field.”

In his role as CMU director, he is charge of making sure that the animals are cared for in the most ethical and safe manner. He smiles with pride as he explains that NEOMED’s comparative medicine unit has achieved the gold standard for animal care, having been certified by the Association for Assessment and Accreditation of Laboratory Animal Care (AAALAC).

Working in the CMU, he must have a favorite animal, right? To him, rats are the puppy dogs of the rodent world. In fact, in pet stores, he tries to talk parents into buying their kids rats instead of hamsters.

Working in a cool place with fun people and the animals that he loves makes Dr. Dannemiller’s job all the more enjoyable.