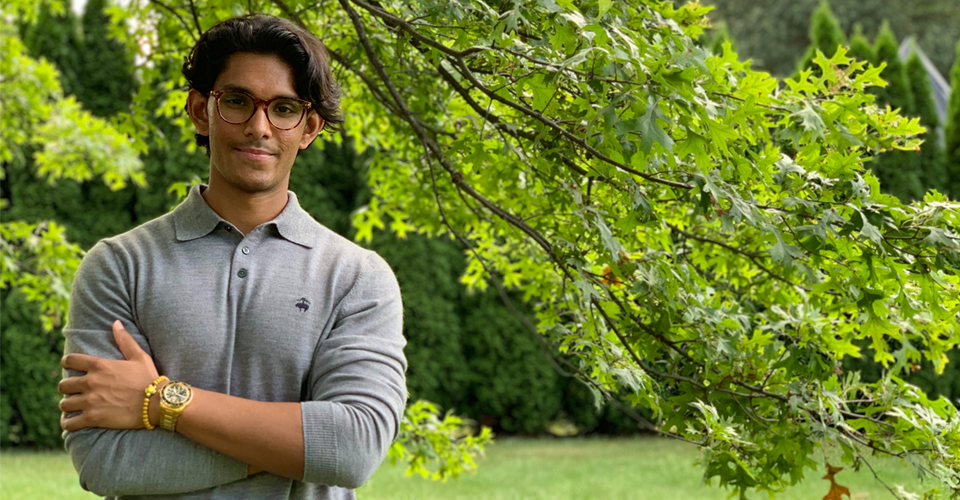 From the time a neurosurgeon relative explained to a young Sanjay Jinka how the brain is like a bunch of cashews, he has been intrigued by science. And by the time he entered ninth grade, he knew he wanted to be a Walking Whale.

Now, as a third-year College of Medicine student, Jinka is beginning a term as a student trustee on the Board of Trustees. Read on to get to know this student and what his new role entails.

What was your path to NEOMED?

I am from Maumee, Ohio, and went to Anthony Wayne High School in Whitehouse, Ohio. My parents are both immigrants from India, so as their eldest child and a first-generation American attending a high school surrounded by cornfields, I definitely had a unique multicultural upbringing. Experiences like my first high school dance, joining the marching band and going to football games were new and foreign experiences for my whole family. As a first-generation American, I learned from a young age how to be independent and think intuitively. I think these skills contributed greatly to my successes today.

I matriculated to NEOMED via the BS/MD pathway at Kent State University. I originally heard about the program from a family friend at Youngstown State University. Knowing you could be accepted to medical school out of high school and also finish two years sooner with this program was really appealing. I was honored to be accepted into the BSMD program, and today I am honored again to represent NEOMED as a student trustee.

How did you develop your interest in medicine?

When I was about five years old my great uncle, a neurosurgeon, explained the brain was essentially like a bunch of cashews that when put together control all human life. He said his job was to modify certain cashews when the brain goes wrong to make everything right again. He was eating cashews at the time, so I swear it made more sense then!

I was infatuated with the idea that a doctor could literally change someone’s life. When I was in high school, I explored the field more. I volunteered in the hospital and did research on the genetics of cancer progression. These experiences showed me medicine was something I was genuinely interested in, so I applied to the BS/MD program and here I am now! Today, while I don’t think I want to do neurosurgery, I am very interested in plastic surgery. However, I am still very open to everything!

What is the role of the student trustee?

The goal of this position is to provide the student perspective to the NEOMED Board of Trustees. This includes speaking on topics like fiscal policy and investments, academic and scientific affairs, institutional advancement, and other matters related to the functioning of the University. I truly believe this position is the pinnacle of leadership at the University, and I am incredibly honored to be appointed to this role.

Why did you decide to apply for the student trustee position?

During our first days of orientation, there was a student leadership panel. Student Trustee was one of the positions highlighted by Harmony Stanger, the assistant director of Student Affairs for the College of Medicine, and Sandra Emerick, the senior executive director of Academic Affairs and Student Services. I thought the position was intriguing. This year, after holding many other leadership positions at NEOMED, namely CEO of the  Student-Run Free Clinic at NEOMED, I felt I was in a strong enough position to apply to fulfill the duties of a student trustee.

What are you looking forward to as a student trustee? What would you like to accomplish during your two-year term?

My goal for the next two years is to work with the trustees to ensure that the student voice is always heard.

Our first meeting is in early September, and I am excited to get to work!