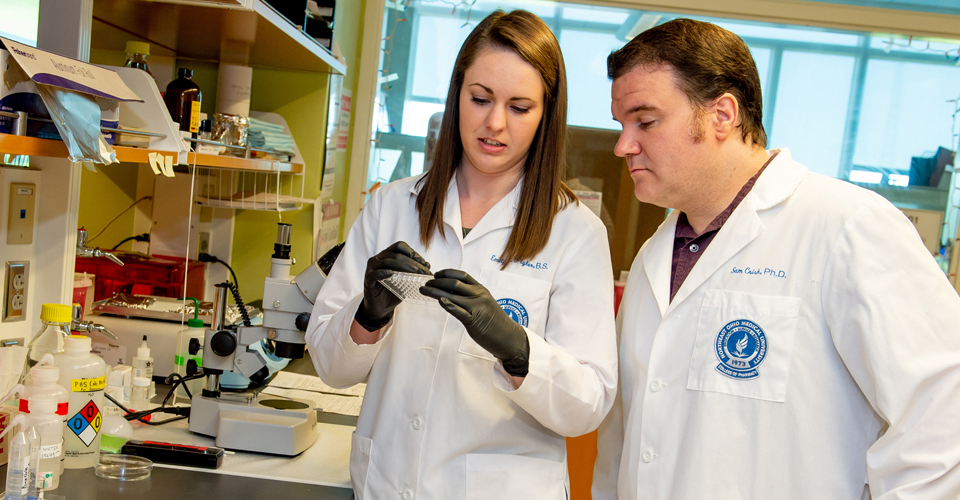 Like many psychology majors, Emily Plyler knew she wanted to pursue a scientific career—but what? When the undergraduate joined a neuropharmacology lab to gain experience in the research field, she not only found an area of science that really piqued her interest; she also quickly discovered an affinity for the research process.

The appeal of research led Plyler, now a Ph.D. candidate at Kent State University, to her current home at NEOMED, where she works in the lab of Samuel Crish, Ph.D. As a researcher on Dr. Crish’s team, she studies the effects of glaucoma—specifically, the events that lead to cell loss.

“Our research is focused on intervening early in glaucoma, before retinal cells are irretrievably lost,” Plyler says. “These events are also related to other neurodegenerative diseases, especially Alzheimer’s.”

Once she completes her Ph.D., Plyler looks forward to finding an appointment where she can teach and continue her research. “Ultimately, I would like to understand the causes of neurodegenerative disease and figure out its progression, so we can fully learn how to treat these devastating diseases,” she says.

Plyler is one of about 30 Kent State University student researchers at the master’s or Ph.D. level of study in the Biomedical Sciences program who are making the most of Kent State’s partnership with NEOMED. While Plyer works under Dr. Crish, her experience in his lab has led to collaborations with other researchers at NEOMED—relationships that have enhanced her research as well as her development as a scientist. The Ph.D. candidate also interacts with J.G.M. (“Hans”) Thewissen, Ph.D., and Brett Schofield, Ph.D., both professors in the College of Medicine; and with Denise Inman, Ph.D., assistant professor of pharmaceutical sciences.

The Ph.D. candidate has also found an additional mentor in Christine Dengler-Crish, Ph.D., assistant professor in the Department of Pharmaceutical Sciences and adjunct assistant professor in the Department of Anatomy and Neurobiology, who studies pre-symptomatic changes in the brain and body in Alzheimer’s disease. She’s always quick to offer both personal and career guidance, says Plyler.

“The faculty at NEOMED is always open to share ideas and offer guidance, even if you aren’t their student or part of their lab,” she says. “Everyone is really invested in expanding knowledge in whatever area they are in, as well as developing the next generation of researchers by teaching them everything they can.”

“I’m able to see my work in a totally different light by gaining the perspective of other researchers,” Plyler continues. “It helps me to reinterpret my data, brainstorm for new projects and evaluate my science from different perspectives to understand how it could be improved.”

Plyler has quickly found success on her own as a researcher. Last year she was one of only two state-wide Female Scholars in Vision Research of the Ohio Affiliate of Prevent Blindness, Inc., which provided $4,000 to support her work. More recently, she was named the recipient of the Mary Ann Stephens and John R. Graham Award, which is given annually to one student who is part of an underrepresented segment in STEM. Shortly after that, Plyler learned that she was also awarded a pre-doctoral fellowship in pharmaceutical sciences from the American Federation of Pharmaceutical Education. This fellowship opportunity will provide Plyler with a $10,000 grant to be used specifically for her research. Plyler says the funds will go towards much-needed supplies to conduct her most recent study, which examines how to halt prolonged inflammation of the eye that can led to degeneration in glaucoma and Alzheimer’s disease.

Plyler has been listed as a co-author for two publications and is in the process of submitting her first study as a primary author. In November 2017 she presented her work at the Society for Neuroscience Annual Meeting in Washington, D.C., which is attended by more than 30,000 people. During her poster session she was bombarded with questions from interested attendees for the entire four-hour duration.

It didn’t faze her.

“Experiences like this are incredibly valuable, because as a researcher, I need to understand how to communicate with a variety of audiences, not only other scientists, but also lawmakers and the general public,” says Plyler.

She strongly recommends that young scientists take advantage of these opportunities, since they help in developing communication skills along with research skills. “Presenting at conferences helps you to evaluate experimental methods with a critical eye as other scientists ask questions. It also helps you learn how to turn your data into figures and organize it in a way that tells a story,’’ she explains.

As Plyler grows as a researcher, she has enjoyed taking a leadership role and providing guidance to those who are following in her path. Last year, she began teaching Medical Neuroscience to first-year medicine students at NEOMED. “I always love seeing that ‘aha!’ moment when something clicks for the student and they are able to comprehend something difficult,” says Plyler. “The students are so eager to learn, and they ask great questions—things that I never would have thought of, which help me to learn as well.”