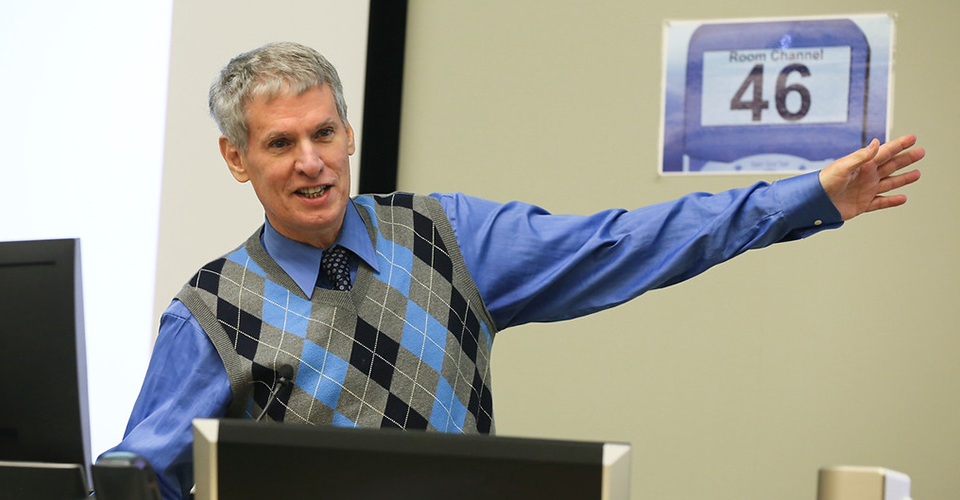 Eminent cancer researcher Frank J. Gonzalez, Ph.D., chief of the Laboratory of Metabolism at the National Cancer Institute of the National Institutes of Health, spoke to an attentive group at NEOMED Tuesday, Nov. 27, on the topic of the role of nuclear receptors in cancer and metabolic diseases. He delivered the inaugural lecture in the Ferenc Hutterer, M. D., Seminar Series in Liver Research, established in memory of Dr. Hutterer for his contribution to medical education and research at NEOMED. Drs. John Chiang, James Hardwick and Philip Westerman spearheaded the fundraising effort and worked in conjunction with the NEOMED Foundation to raise the funds to establish the lecture.

Dr. Hutterer led a dramatic early life. Born in Hungary, he survived life in a labor camp during World War II, then fled his country with his wife, Maria, and son, Richard, during the Hungarian Revolution of 1956 to settle in New York City. In 1975, Dr. Hutterer was recruited as the first program chief and professor of molecular pathobiology at NEOMED, where he served until retiring in 1996.

His widow and son were on hand for Dr. Gonzalez’s lecture. Leading up to it, NEOMED faculty members remembered Dr. Hutterer’s accomplishments and a love for classical music that couldn’t be contained; Dr. Hutterer was known for singing in his lab.

A legacy continues
Philip Westerman, Ph.D., an emeritus professor and former colleague who made introductory remarks at the lecture, said afterward that Dr. Hutterer planted the seed for liver research at NEOMED.

Distinguished University Professor John Chiang, Ph.D., noted in his remarks that some 40 years ago, Dr. Hutterer got him started on a research project studying regulation of bile acid in the liver — a topic that Dr. Chiang has pursued as his life’s work, supported continuously by two major NIH grants for over 35 years.

Steps used to take longer in science, said Dr. Hardwick — but push and persistence led Dr. Gonzalez to discover two major genes in metabolism and contribute to pharmaceutical therapies. One well-known drug, metformin, now used to treat diseases and conditions including diabetes, was a subject of Dr. Gonzalez’s discussion at the Nov. 27 seminar. The researcher is currently studying the use of metformin in liver and colon cancer. Technical questions from the attendees showed their interest and engagement in Dr. Gonzalez’s presentation, which he flavored with humorous touches like a photo of bacon treats used in research.

After the event, Maria Hutterer said that her tears when she entered Meshel Hall that day came from an overwhelming warm feeling of once again being in her husband’s familiar surroundings at NEOMED. “He still lives here,” she said.