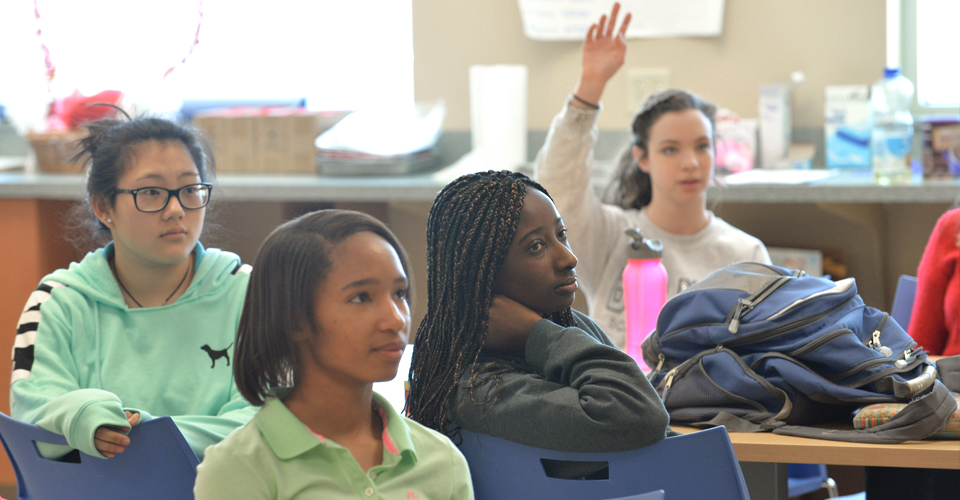 This article is the third in a series about the epidemic of addiction to prescription pain medications and how NEOMED is training future physicians and pharmacists to help.

Doug Gugel-Bryant quickly learned one thing when he started visiting high school students to talk about prescription drug abuse: Addiction doesn’t become real until you actually experience working with it.

“It’s one thing to study it in class and another to work with students directly affected by the abuse,” says Gugel-Bryant, a fourth-year NEOMED College of Pharmacy student. As someone close to a high school student’s age, Gugel-Bryant has built-in credibility. Students listen to him in ways they might not listen to parents or teachers. And Gugel-Bryant feels strongly about the need to tackle this difficult topic.

He is one of 16 College of Pharmacy students participating this year in NEOMED’s Rx Abuse Prevention (RAP) Ambassadors Program. Dale English, Pharm.D., R.Ph., associate professor of pharmacy practice and pharmaceutical sciences; and Timothy R. Ulbrich, Pharm.D., associate professor of pharmacy practice at NEOMED, developed RAP five years ago, modeling it on the successful Generation Rx Initiative developed by The Ohio State University College of Pharmacy and the Cardinal Health Foundation.

The format is for groups of three or four pharmacy students from NEOMED to talk about the risks of prescription drugs to students (usually freshmen and sophomores) at high schools throughout Northeast Ohio.

The program works to change such misconceptions. The NEOMED presenters use five key statistics to teach concepts about prescription drug abuse and the impact it can have on the students and their peers.  Each statistic is represented by one word (abuser, associate, pressured, etc.) and that word is on a bright piece of paper that the NEOMED team lays on the desk of students before starting the class.  The number of students who have that card match the percentage for that statistic. For example, for ABUSER, the statistic is that “one-fifth (20 percent) of high school students reported using a prescription drug without a doctor’s prescription one or more times in their life.”

So, if the class has 20 students, the NEOMED team will place the ABUSER card on the desk of four students to represent the 20 percent, then say, “Anyone with a sheet of paper that says ABUSER, please stand up.” With this example, according to the statistic, four individuals in that class would have reported using a prescription drug without a doctor’s order. The four students stand up, then the NEOMED team reads the statistic and discusses it.

“Involving the students in this way helps the statistics to come to life rather than just be a number on paper,’’ says Dr. Ulbrich.

The students are very attentive from start to finish, says Gugel-Bryant. He thinks it’s because the topic is so real to them. “When questions are asked at the end of a presentation, students sometimes provide answers to questions we hadn’t brought up about the consequences of drugs, such as a student dropping out of school,” says Gugel-Bryant. There may not be any dramatic confessions, but when facial expressions change and students became very quiet, he can sense if a comment related to them.

After the presentation, the pharmacy students talk with the high school students about college and what it takes to enter a professional school to become a pharmacist. ‘’One of our goals is to show that going to college or pharmacy school gives you a sense of direction that helps you to stay away from drugs,” Gugel-Bryant says.

“This work goes above and beyond academics. All of the students are volunteers,” said Dr. English. “Students volunteer because they have a passion to make a difference in their communities.”

On a local level, Drs. English and Ulbrich are proud to see Gugel-Bryant and his peers putting into practice a goal that the Ohio Drug Use Prevention Education Committee discussed at a public forum in Akron in September: teaching elementary, middle and high school students about drug use. With each visit, these students are doing their part to combat the opioid epidemic.