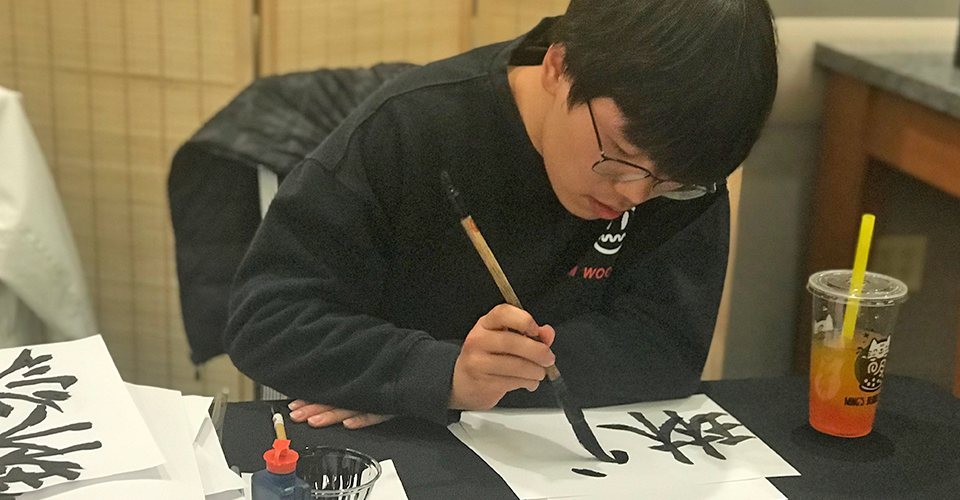 What do you do when it’s Lunar New Year and you can’t get the costume for the traditional Lion Dance because it’s out of commission?

You go on with the show — in this case, the party thrown annually by the Asian Pacific American Medical Student Association (APAMSA). You hide red envelopes of lucky money under the chairs of the dinner tables in the Grand Ballroom for guests to find. You serve two flavors of bubble tea (tapioca makes the bubbles) with lots of Japanese food. And you make your own lineup of entertainment with student performers, including a pair of learners from Anhui University who sang the song “Lemon Tree” in alternating verses of Chinese and English.

Jinsoo Lee, a second-year College of Medicine student who is a co-vice president of APAMSA, did double duty, serving bubble tea and then picking up a violin to perform as a soloist.

Matthew Hom, a second-year College of Medicine student who serves with Catherine Lee (also a second-year student in the College of Medicine) as co-president of APAMSA, was master of ceremonies for the event Tuesday, February 4. He announced that money raised from this year’s event will benefit Asian Services in Action, Inc., which has offices in both Cleveland and Akron.

Hom knows the nonprofit organization firsthand. While at the University of Akron, Hom and some friends volunteered at Findley Elementary School in Akron via ASIA, Inc., to help students with reading, homework and athletic activities. Hom has also spent some time mentoring high school students at Jennings Community Learning Center in Akron through ASIA, Inc.

“They’re underserved, and they need role models and resources, for college and just in general,” he said.

Coincidentally, Amy Lee, M.D., M.P.H., professor of family and community medicine, is currently the board chair of ASIA, Inc. Dr. Lee said at the event that she was surprised and happy to hear that the organization would benefit this year.

Dr. Lee relayed that when she contacted Elaine Tso, Esq., the chief executive officer of ASIA, Inc., the next day, Tso said she was happy to hear about the APAMSA celebration at NEOMED and extended her thank you to Matt and APAMSA.

Photo: Students, faculty, staff and guests could have their names written in calligraphy during the Lunar New Year event.