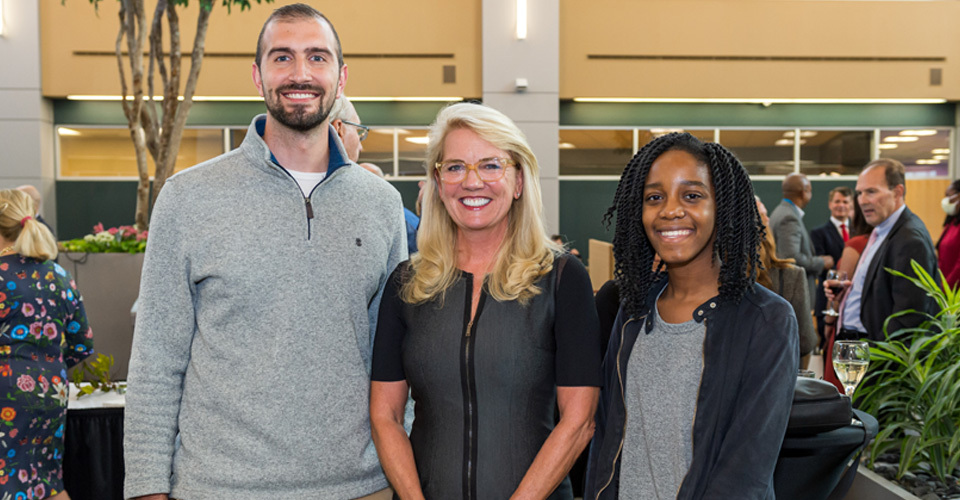 Dr. Gershen passed away in November 2020, a year following his retirement as the sixth president of NEOMED. To honor and continue Dr. Gershen’s commitment to increasing diversity in the medical professions, his widow, Carol Cannon, established a scholarship endowment through the NEOMED Foundation for URM (underrepresented minorities) medical professionals.

Additional gifts from individuals and the Throckmorton Foundation have brought the endowment total for the Jay A. Gershen Scholarship for URM Medical Students to more than $83,000.

In his remarks to the attendees, Baumann acknowledged Cannon, who had traveled to Rootstown from her home in Colorado to support the event. He noted gratefully that no individual’s success is theirs alone.

“It feels significant to get this award because it’s the first time this scholarship has been given, and it feels good to be known for a good cause,” Syllissa Duncan said in a conversation at the reception.

Mairim Avila wasn’t able to attend the event, due to the pharmacy rotation she is serving, so she provided written remarks to be read. In them, she remembered the kindness of President Gershen, who would ask how her day was going if their paths crossed on her way to class. He made all students feel welcome, she said.

Cannon said in a conversation after the event that it was heartwarming to hear how her beloved husband had left his mark on so many people – and to see his work continue through the scholarship.

In his remarks, one person Dr. Langell recognized was second-year College of Medicine student Diamanta Panford, who began bringing student concerns to his attention soon after he began his tenure in 2020. In a conversation  after the event, Panford said that it had felt difficult at first. “I wondered if I was overstepping, as a student,” she said. She also wondered if she should be giving the new leader time to settle in. But she met with Black and Latinx student to poll them on what changes they’d like to see at the University, and when she presented the results to Dr. Langell, he took them seriously, she said.

Panford said she has already seen some tangible results, such as the hiring last January of Iris Mirelez, M.Ed., assistant director of Student Diversity in the College of Medicine, who is involved in the admissions process; provision of a means for students to be connected with counselors with whom they feel culturally comfortable; and work towards bringing the number of Black and Latinx students in the College of Medicine proportionally in line with those populations in Ohio overall.

After the event, audience member Lisa Bennett, M.D., reacted with elation to the news of increased URM enrollment. Dr. Bennett remembers being the only URM student in her graduating class from the College of Medicine in 1993. About the Jay A. Gershen URM Scholarship

Each year, all NEOMED students who are underrepresented minorities will be eligible to apply for a $1,000 scholarship. The award is non-renewable. One student from each of NEOMED’s three colleges may be selected each year.

The scholarship fund is now endowed for $83,000, Dr. Langell noted at the event.

More information about the annual scholarship may be obtained by emailing the Office of Financial Aid at finaid@neomed.edu.