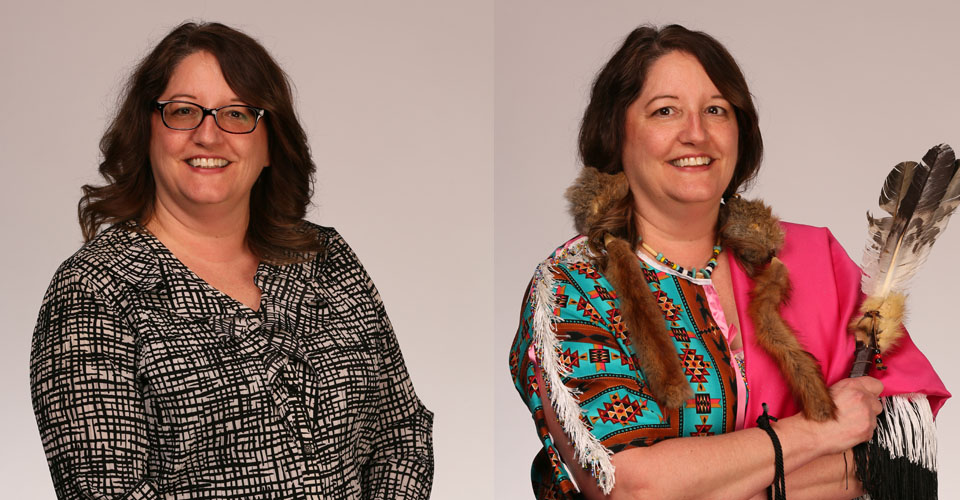 It’s Never Too Late to Embrace Your Culture

Balancing work and home life can easily become chaotic—but Kim Kennedy also knows how to step back and re-charge, thanks to a little help from local Native American elders. Life changed for her about a decade ago, when she was working in the Student Multicultural Center at Kent State University and decided to become an active member of local Native American communities.

Kennedy grew up in a climate where being different was not celebrated, but hidden. Likewise, Kennedy spent the first half of her life choosing not to identify or celebrate her Native American culture. After she started looking into her family history, Kennedy began to feel connected to a new community. When her father attended a powwow in Kent she hosted with the KSU Native American Student Association, the memories overwhelmed him. Surrounded by Native American food vendors, a drum circle and a teepee, her father became emotional, saying, “I remember.”

These days, when she’s asked, she checks the box for both White and Native American.

“Being Native American brings up great conversations. I would love to see more people look into their history and acknowledge that they are Native American too,” says Kennedy.

When the University began planning its I am Diversity campaign celebrating differences and inclusion, Kennedy didn’t think twice before volunteering to share her recently reclaimed culture for the brochure, video and banners across campus. Making up for years of lost time, Kennedy wants the community to know that there’s more than meets the eye to many Native Americans.

It’s a little annoying when people say, ‘You don’t look Native American,’ she says, “Of course I’m not going to wear my regalia and hair braided every day!’’ In the recent I Am Diversity publication and video, she does wear some of her most treasured pieces of apparel (much of it, gifts from  local elders), such as mink headpieces, hand-stitched and beaded regalia, a shawl and a necklace hand-carved by a fellow Native American student from KSU.

Most important, Kennedy continues to advocate and educate, both on campus and throughout the community. “Often, Native American events are centered on food, she notes: “When you sit down and eat a meal together, you take a break from life’s busyness and appreciate who you’re with at the moment, says Kennedy. “Meals are very important to help us connect.”