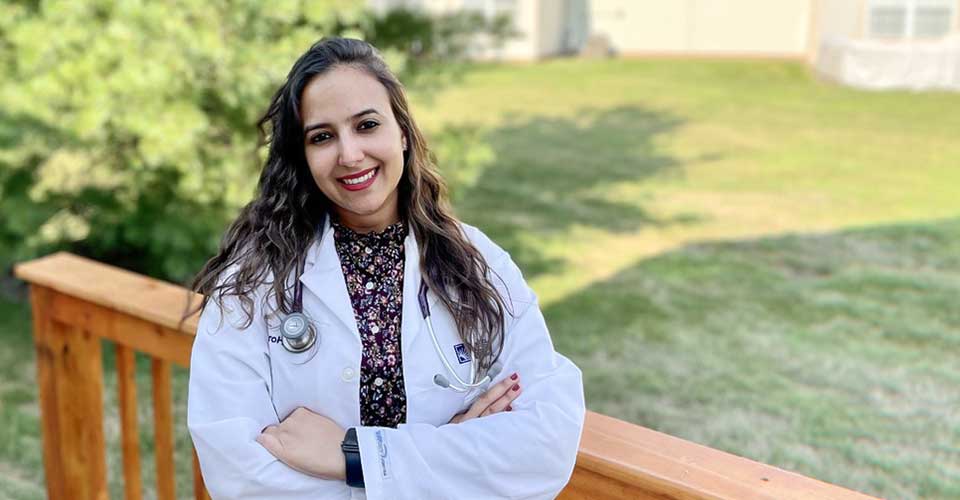 Journey of the Underrepresented: Life as a Latina Health Care Professional

The Journey of the Underrepresented series of articles was written by Asha Blake, a local photojournalist and senior at Kent State University, to explore challenges and barriers faced by underrepresented minorities in the health professions.

For Anibelky Almanzar, M.D. (’22), growing up in the Dominican Republic shaped her choice into wanting to become a health care professional.

In the rural areas of the country, she saw other Dominicans dying from preventable health problems. People would get sick and did not have easy access to health facilities – the nearest hospital was an hour away and many people did not have health insurance nor the money to pay for medical services. As a result, some would die from diseases that could have been prevented with early detection.

The death and despair made Dr. Almanzar want to become a doctor.

But the road to get there wasn’t easy.

As a first-generation college student, she had to pave her own way to get into a medical university. Although she had the drive to do so, it was still a struggle to make the transition from her undergraduate program at Hunter College in New York City to Northeast Ohio Medical University. Dr. Almanzar’s undergraduate advisor even tried to discourage her from going at all. “They told me, ‘you’re a first-generation student, you have many obstacles, you’re not going to make it,’” Dr. Almanzar says.

However, she kept her eye on the big picture and after getting her bachelor’s degree in biology from Hunter College in 2014, she enrolled in a post-baccalaureate program at Cleveland State University (CSU) — the NEOMED-CSU Partnership for Urban Health.

Upon graduating CSU in 2018, she matriculated to NEOMED, where she not only completed a Doctor of Medicine degree but also a Master of Arts in Medical Ethics and Humanities degree, receiving both May 7, 2022.

While she made her way from CSU to NEOMED (a 50-minute drive along I-77/I-76), the transition from Cleveland to Rootstown was a challenge for her. The environment between the city and township differed immensely. “In Rootstown, because of my accent and how I look, people would often ask where I was from without even saying hello or introducing themselves,” Dr. Almanzar says. The NEOMED campus also was less diverse than CSU’s, which made her experience challenging when she first came to the University.

She struggled to find mentors who shared and understood her background and lived experience. There were faculty members in the College of Medicine who assisted Dr. Almanzar in her journey, but she would have loved having a mentor who reflected her culture.

Although she did have some trouble adjusting, she made a few key connections along the way, including another Latina who attended both CSU and NEOMED around the same time.  “I know that if I did not start out with her at NEOMED, I would have felt completely different,” Dr. Almanzar says. She also joined NEOMED’s Latino Medical Student Association (LMSA) chapter to connect with other people who were from either Hispanic, Latinx or both backgrounds.

These relationships kept her going and made her realize that she was not alone at the University.

Dr. Almanzar is now completing her internal medicine residency at MetroHealth Medical Center in Cleveland. She mentioned that her transition back to the city was smooth, and she feels comfortable working in her specialty.

Although she is in the minority as a Latina internal medicine physician, she remains optimistic about her career. The neighborhoods surrounding MetroHealth are quite diverse and having the ability to speak to her Spanish-speaking patients in their first language makes her feel elated. “I saw one patient and she was grateful that I spoke Spanish because she had a lot of questions about her medical conditions,” Almanzar says. “Nobody had ever explained anything to her before.” For some of her patients, they never had the opportunity to speak to a health professional who spoke fluent Spanish. Dr. Almanzar presents a sense of familiarity that many of her Spanish-speaking patients have never had before.

Dr. Almanzar can relate. And so might other underrepresented minority (URM) students training to be physicians. To help them become more comfortable and successful in such environments, Dr. Almanzar offers some recommendations to school administrators:

Dr. Almanzar adds that not every student has a family that can help pay for these resources. Some individuals, like Dr. Almanzar, may be the first family member to go to college. In many of those cases, individuals have to take out loans to help pay their way through school.

As she understands what it is like to go through this barrier, Dr. Almanzar strongly believes that the admissions process must change. “I think once universities realize that URM students are at an economic disadvantage, then this can help change policies so these students can get more accessibility [to resources] as they start applying for medical school,” she says.

While there are many factors that can influence a URM student’s experience at a medical university, Dr. Almanzar’s suggestions are also meant to potentially increase the number of URM students that medical universities need to better reflect the United States demographics.

The health care workforce has a long way to go in terms of making the field more diverse, but it can be done. With more Latinx health practitioners in the field, this can help many Spanish-speaking patients get the care that they deserve. “We have to mirror our patients,” Almanzar says.

[Editor’s note: From Dr. Almanzar’s start as a first-year medicine student in 2018 to the 2022 incoming classes, NEOMED’s total URM enrollment has increased by 60%, due in part to feedback and the great advocacy by students like her. Despite such accelerated growth, University administrators agree more diversity is needed to better reflect the communities where students will serve.]

Also in This Series