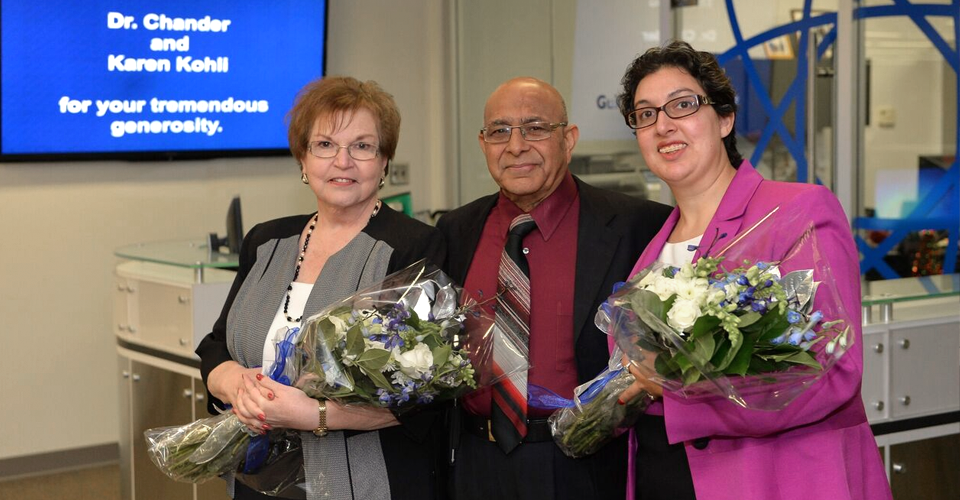 NEOMED recognized and celebrated the generosity of Dr. Chander and Karen Kohli with the naming of the University’s medical library and its production studio during a private gathering Thursday, Dec. 8. Family and friends of the Kohlis joined University faculty, staff and students for the official announcement and unveiling of the Aneal Mohan Kohli Academic and Information Technology Center. Originally named the Oliver Ocasek Regional Medical Information Center, the medical library was re-named in recognition of a gift from the Kohlis that honors their late son, Aneal Mohan Kohli.

Aneal, whose promising life was cut short at age 30, loved creating videos and the technology associated with them. The University also named its production studio, the Aneal Mohan Kohli Media Production Studio, to honor the gift’s impact in helping to advance student achievement—one of the goals of the University’s $40 million Shine On Campaign.

As practitioners and philanthropists, Dr. Chander Kohli and Karen Kohli have spent a lifetime giving to Northeast Ohio. Dr. Kohli served as chair of the NEOMED board of trustees from 2013-15, during a time of great growth for NEOMED. He has served on the board longer than any other current member. A leading neurosurgeon, he has operated a private neurosurgical practice in Youngstown since 1972. Karen Kohli practiced as a nurse and has remained active supporting numerous health care institutions and initiatives.