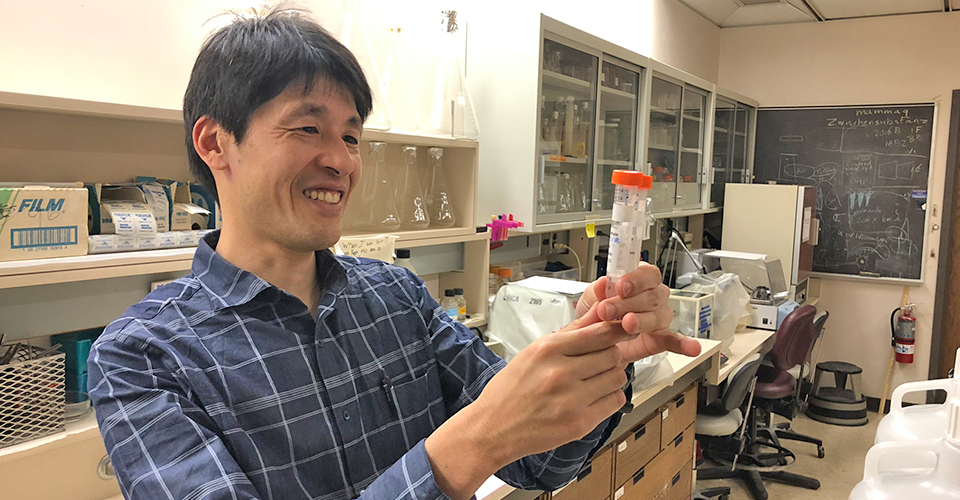 If whales are related to goats, giraffes and pigs, does that mean they can smell, too?

A common interest in whales has led Hans Thewissen, Ph.D., Ingalls-Brown Professor of Anatomy, to welcome a special visitor back to NEOMED again this winter.

Since 2009, Takushi Kishida, Ph.D., an assistant professor at Kyoto University in Japan, has traveled to NEOMED to study bowhead and beluga whale samples Dr. Thewissen has collected while conducting research in Alaska.

Dr. Kishida is a molecular biologist who studies olfaction (the sense of smell) and the genomic basis for it, especially as related to the evolution of whales and sea snakes.

“Other animals, like goats, deer, giraffes, pigs and camels are land relatives of whales. Those animals have a very good sense of smell, yet whales have a very poor sense of smell. Dr. Takushi wants to know what genes whales have kept and which genes they have gotten rid of during the process of evolution,” says Dr. Thewissen.

Teaming up in Tokyo

The two originally met while Dr. Thewissen was living and working in Tokyo as a visiting professor.

While attending a conference in 2008, hosted by a Japanese colleague, Drs. Thewissen and Kishida discovered their common interest in the evolution of animals that go from one environment to another.  Dr. Thewissen studies whale evolution, how whales were once land animals that than evolved to become aquatic. NEOMED’s mascot, the Walking Whale, is based on a transitional fossil whale that he discovered in Pakistan

“Since I have an interest in olfaction, I study the histology of bowhead whales and do all my experiments here at NEOMED,” says Dr. Kishida. In addition to histology, he also extracts DNA and RNA from samples of whales collected by Dr. Thewissen in Alaska.

It’s actually illegal to take whale tissue samples back to Japan, so Dr. Kishida copies the DNA to a different type and takes that back to Japan.

Dr. Thewissen explains: “Takushi can’t take anything that was in the whale back to Japan – but he can make copies of it. It’s like not being allowed to take a rare book from the library, but you can make a copy of the pages and take those home.”