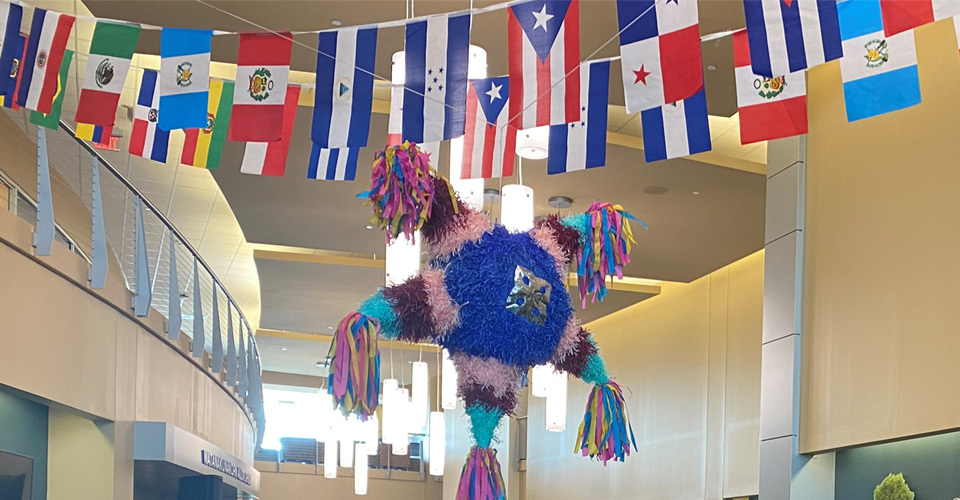 Word clearly had gotten out.

Students – maybe as many as 200 of them, according to a couple of participants – poured into the atrium outside Watanakunakorn Auditorium starting at noon Wednesday, Oct. 6, for the Latin American Travel Fair. They sampled food, including Mexican flan served by College of Medicine Dean Elisabeth Young, M.D., and circulated around tables decorated with textiles representing various Latin American countries.

The event was a collaboration of the Latino Medical Student Association, Office of Diversity, Equity and Inclusion, and the COM Diversity Team. With the help of other student volunteers, LMSA Co-President Andrea Cervantes (M2) and Spanish Medical Officer Sofia Mesa (M1) organized and ran the event, held to the backdrop of high-energy Latin music.

“Andrea and I thought this would be a great way for the LMSA to celebrate Hispanic Heritage Month and have everyone be a part of it in an interactive manner,” Mesa said after the event.

“NEOMED’s administrators, including Dr. Ilodi, Victor Torres and Iris Mirelez, were amazing, and it is thanks to them that we were able to pull this off.”

Learning from each other

Gisseth Mora Scarpetta (M1) was among the students making small bouquets of flowers in jars – an  aspect of a traditional 11-day Colombian independence celebration.

At one of the many other tables set up around the lobby, Frank Cedeño (M1) passed out magnets and keychains with photos of llamas, teaching how reliant Peruvians have been on the animals since ancient times. At another station, Jurgen Daye Trujillo (M1) played a key part in explaining Puerto Rican culture.

Vincent Pham (M2), treasurer of the LMSA, said that he’s from Southern California and pursued a Spanish minor when he came to Ohio. He’s not Latinx but wanted to be sure to support the event – and credited his classmates for doing the same.

Those who remained after the initial rush still had more to enjoy. Under swaths of flags representing many countries, students watched as Jurgen Trujillo spilled a piñata’s tasty innards, raining candy from the second-floor balcony.

Even as the decorations were being taken down around them, two LMSA board members kept the party going. Teresa Whetstone (M2) explained that she had fond memories of living in Buenos Aires for a year. She brought them back by teaching classmate Deepa Ananth, M2, how to tango.

Ananth, who helped to present information about Colombia, said that as someone who not ethnically part of the Latinx community she learned a lot – and hoped her classmates did the same.

Reflecting after the event, Cervantes said, “I hope that showing a little snippet of what makes every country so beautiful will increase awareness of the growing number of Hispanic/Latino students – and  more important, the growing Hispanic population in the United States.”

Watch The Pulse for announcements of upcoming events on the Embracing Diversity series.