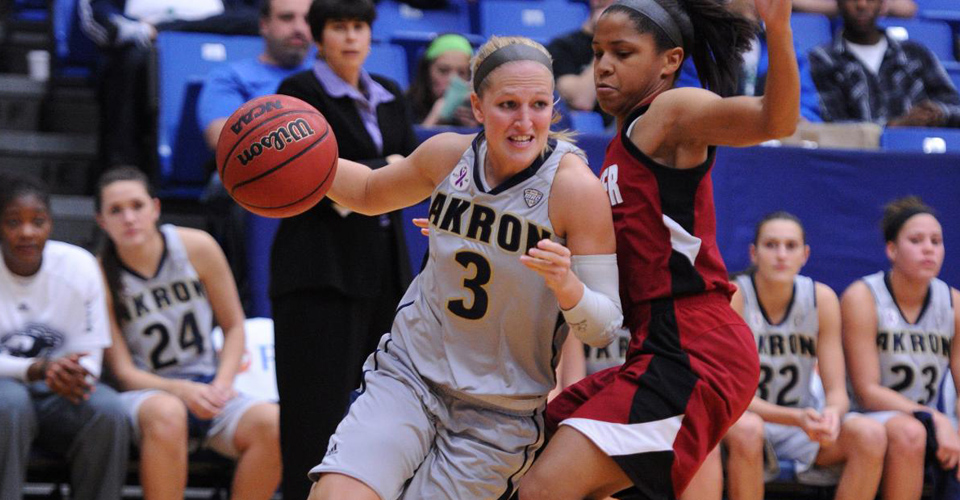 Leading On and Off the Court: Kacie Cassell Sets Sights on Advancing Pharmacy

As a standout point guard for the University of Akron Zips Women’s Basketball team, third-year pharmacy student Kacie Cassell learned all about being a leader and dealing with stress. The third-year College of Pharmacy student fully expects the U.S. Women’s Basketball team to prevail and take home the gold at the Summer Olympics in Rio de Janeiro. “I think they’re going to dominate,” says Cassell. “It’s a very deep and talented squad.”

Cassell knows success. She helped lead the Zips to their first MAC Championship in the school’s history during the 2013-2014 season. It was monumental occasion for the team and the university—one that was years in the making.

When Cassell and her teammates arrived at UA as freshman, something immediately stood out to her. The men’s side of the basketball court was strewn with banners celebrating the honors the team had earned, while the women’s side was bare.

“We used the desire for a banner as motivation throughout our four years playing together,” Cassell says. “Now any time we go back and visit, our banner is hanging for the world to see. The feeling of hoisting the trophy with my teammates as confetti fell from the ceiling is something I’ll never forget.”

While Cassell had opportunities to play professionally overseas after graduation, she was set on attending NEOMED to begin her next journey. While her passion for hoops remained, her lifelong interest in the sciences made for an easy decision.

She had always been interested in the mechanisms of the human body, and how they all needed to work together to function properly. As a three-sport athlete throughout most of her life (Cassell also starred in soccer and track), she worked through various knee and ankle injuries that sparked her interest in the medical professions.

As a bio-chemistry major at UA, Cassell balanced a difficult academic workload while taking on the rigorous schedule of a Division I student-athlete. Fitting in lab work between practice and games was no small task, and she was often the only one with her light on in the team bus as she would study late into the night on the way home from a game.

However, it was her love of science paired with her desire to find a career where she would help others, one-on- one, that solidified her decision to become a pharmacist.

“My grandparents had a large collection of medications they each took on a regular basis, yet they knew very little about what they were prescribed—how the medications worked and what side effects they could cause,” Cassell says. “I happened to be with them one day on an errand to the pharmacy, and a pharmacist took the time to answer all of their questions. That one visit with a caring pharmacist ended up being an extraordinary help for them. That experience definitely put the wheels in motion for my career.”

Cassell has set her sights on working as a hospital pharmacist once she earns her Pharm.D. She also is interested in finding a way to combine her interests in medicine and sports, especially by helping younger student-athletes.

“Many younger athletes make the mistake of returning from an injury before they fully recover,” Cassell said. “As an athlete, nothing is worse than sitting out and not being able to contribute with your teammates during a game. But in the long run, you just need to let your body heal and perform at your peak performance while limiting any potential setbacks.”

As far as all the controversies and health concerns surrounding the city of Rio and the Olympics, Cassell says it wouldn’t stop her from participating if she had the opportunity: “It’s a once in a lifetime opportunity that you can’t pass up.”