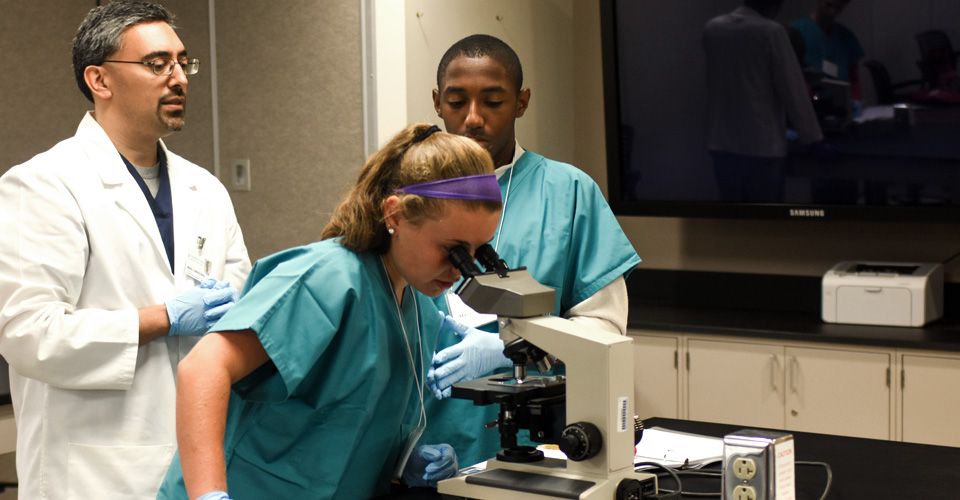 Dancing, throwing paper confetti and battling with giant pink pillows helped MEDCAMP students act out the role of a cell in a video called “The Immune System’s Response to a Bacterial Infection” that they made as part of this year’s MEDCAMP, held from July 21-23 on campus.

Dana Peterson, Ph.D., associate professor of anatomy and neurobiology taught a lecture on cells and then the students gathered in the courtyard to film the video. Students were divided into teams based on the color bags they were given. Each color stood for different cells: blue team-macrophages--they eat bad bacteria, red team-neutrophils--they help blow up bad bacteria, green team- dendritic cells--they eat bacteria and display it for the body to see, orange team-T-Helper 1-2 cells--they activate cells to kill bad bacteria and B-cells and yellow team- B cells--they signal where bad bacteria is located in the body to get rid of it.

The activity was one of many hands-on experiences for the 52 ninth-grade students who attended the three-day camp to explore the fields of medicine and pharmacy. Other activities included learning to make pharmaceutical compounds, working with a simulated patient (an actor playing the role of a patient) and attending microbiology and neurobiology labs.

Workshops included research as well as clinical problem-solving. In one session, each student team was given a case study of a patient with an unknown infection, then used lab work and clues left by the patient to solve the case. At the end of camp, the students presented the solved case in front of parents and student mentors in a ceremony at which each student received a “beginning doctorate degree.”

When the students were asked what medical career interested them, they gave a variety of answers: a nurse, a pediatrician, a radiologist, a neurosurgeon, an anesthesiologist or something related to sports medicine.

As part of the three-day experience, students spent the night at Kent State University dorms.

Along with the memories, each student will always have the green NEOMED scrubs that they were given to wear at camp.